Who Wants the Sick Baby and for How Long? 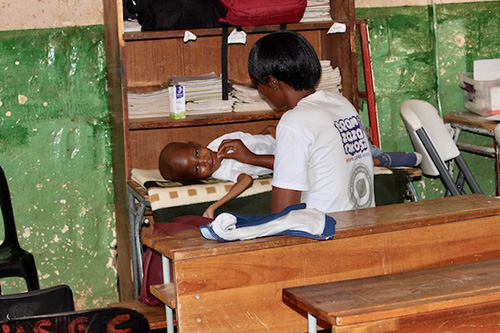 When a mom and a grandma fight over a sick baby, what is The Luke Commission’s response? Does TLC get involved, even if the outcome is unknown and the details are confusing?

Since “every last one” is important at TLC, the answer is “yes, yes, yes.”

Grandma came to campus with her gravely ill grandson. He needed immediate attention to save his life. Grandma’s son is the father of the baby, she said.

While the grandmother and baby stayed at the Miracle Campus, the mother of the child showed up, saying she wanted to reclaim her child.

Grandma objected. “She is coming and going and not taking care of the baby,” claimed Grandma.

Both the mother and the baby are HIV+. As far as was known, the father is negative. He helps support the baby, both women said, but is not married to the baby’s mother.

Legally, The Luke Commission could not keep the boy’s mother from taking him once his condition was stable. The mom ran away to South Africa.

When the baby’s health started to deteriorate again, his mother returned from South Africa and brought her son back to the Miracle Campus, saying his grandmother could take and care for him again, after TLC “makes him better.”

The baby’s mother said she was receiving antiretroviral treatment (ART) from another facility. The TLC medical team said that was fine but recommended she transfer to The Luke Commission. That way she and her baby could be together. She did not accept this plan and left the Miracle Campus, giving her son back to his grandmother.

A month later, the grandmother, daughter-in-law, and baby boy were back at the Miracle Campus. This time reconciliation took place.

Once again, Grandma returned the baby to his mother. “I promise to take care of my baby. His grandmother can see him, because we live close,” said the 24-year-old mom.

The two posed for photos with baby, who now is much healthier, and a TLC staff member. “Thank you, Luke Commission, for taking care of them both,” she said.

While the boy’s mother promised to be responsible, Grandma pointed out that there was “no food at her family’s homestead.” Then she looked down and sighed. “But we are neighbors. I will continue to help and to watch the baby’s health.”

The one-year-old baby is Mom’s only child. She has known for two years that she is HIV+.

This is not the end of the story, however!

Mom gave the baby back to Grandma sometime after they seemed to resolve their differences at the Miracle Campus.

Then one day, the Grandma, who cares for other grandchildren, came to the Miracle Campus. She did not want the baby anymore, “because I found out this child is not my son’s child.”

In cooperation with Eswatini’s social welfare department, The Luke Commission found a Christian children’s home, one of the few in Eswatini, who will accept the child and give him a secure home. While waiting for all the details to be put into place, the little child lived on the Miracle Campus.

Yes, TLC gets involved, because young lives and futures are at stake. May this boy grow and prosper, knowing he is not defined by family squabbles.

PS Understandably, for this update, we did not use the photos that were taken during the time mother and grandmother agreed to share the baby’s care.