‘Unbelievable, This is My Day to See!’

“I heard The Luke Commission does,” answered his fellow medical student. “Here is their number.”

At age 28, Sithembiso had been struggling with eye problems ever since he was a third-grader. His family was returning home from the United Kingdom where his father had been going to school, when Sithembiso had a severe allergy attack which permanently damaged his eyes.

On the Miracle Campus, CARES surgical eye weeks happen three or four times a year, when ophthalmologists come from the US to perform cataract and other eye surgeries with TLC’s medical team. Miracles unfold right before our collective eyes, as Swazis who could not see receive the gift of sight.

Recently, Dr. Alex Cohen served here for the fourth time, bringing with him a cornea donated by the Iowa Eye Bank.

“I’m so grateful for the manner in which things are done at The Luke Commission. Hope is instilled, not only for me, but for many people,” Sithembiso said, as he pointed to patients waiting for follow-up cataract surgery testing. 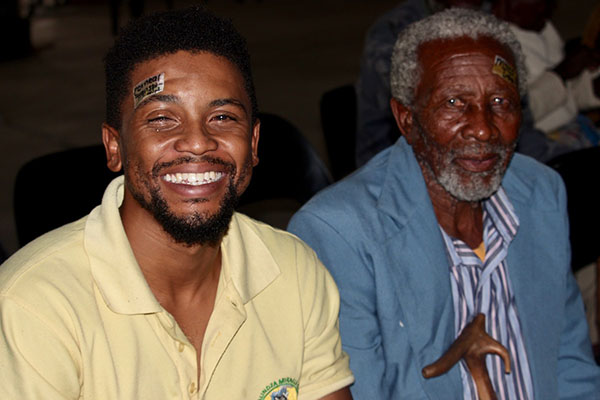 Sithembiso and another grateful Babe [Father] wait to have their eyes tested after the removal of their surgery bandages.

“When you grow up without proper vision, people say bad things about your future,” he noted.

Asked about his faith, Sithembiso answered: “Without Jesus, I would not be here.

“Something, I mean Someone, pushed me to go to the store that day I met the doctor from Mbabane who told me about TLC. I almost talked myself out of going that day,” he laughed.

“Since I ran into him that day, everything has clicked. God has been answering me. Before I asked Him if I could have some contact lenses that were not so painful, and immediately [snapping his fingers], I received soft ones that worked for me.”

Continuing: “Then I told God that I really want to see [snaps his fingers again] and I learn about TLC. I was looking all over South Africa to find help. Then I heard about TLC and [fingers snapping], here I am with a new eye.”

With a slow, incredulous but crediting shake of his head, Sithembiso said reverently: “These are His footsteps guiding me. I have no fear this time. I was praying softly during the operation. I’m so grateful. Without Jesus, life is not living.”

Ten years ago in South Africa at the age of 18, a cornea was transplanted into Sithembiso’s right eye. 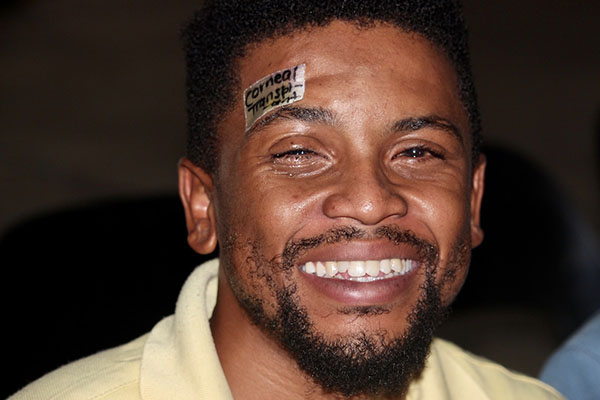 “I did not know how to take care of a transplant. The doctor who performed the operation worked in both the private and government sectors, and I could not find him, so I came back home,” he remembered.

“At first I could see clearly, and then everything changed. If I had known it was a process and not a one-time thing, I would have done better. Now I know,” explained Sithembiso, recalling how his eye rejected the transplant, making it necessary to remove.

As a child after his eyes were damaged, Sithembiso wore eyeglasses, “but I got fed up with them. They were not too helpful.”

After the failed transplant, Sithembiso wore hard contacts for three years “off and on. They were very painful.”

In 2014, he started wearing soft contacts. “They were best for me so I could see well enough to get through school.” Sithembiso is a nurse but does not have a job because of his compromised sight.

His left eye is “not good either, but I can see much better with contact lenses.” 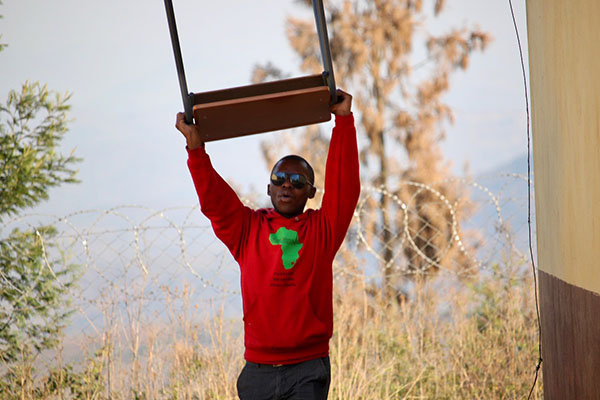 TLC staff member Nhlakanipho knows what it means to get a new cornea and new sight. “Makes you feel strong and invincible,” remembers Nhlakanipho, who encouraged Sithembiso through his surgery.

And his journey at The Luke Commission? First he met Nhlakanipho, a staff leader who came to TLC three years ago and received a transplant. A year later, Dr. Cohen brought him another cornea, which was grafted into his other eye.

Nhlakanipho has encouraged Sithembiso every step of the way. Nhlakanipho told the new eye patient emphatically: “Today I can see.”

Sithembiso first came to the Miracle Campus in September 2019. After tests, measurements, and counseling, he was told he was a candidate. In November, more tests were run and TLC’s medical team consulted with an international team of volunteer ophthalmologists.

“They told me it was risky to redo an eye, but they would try.”

Sithembiso received a call Friday. “I was told to pack my bags. Come Sunday. The operation will be November 25,” he said.

“It was unbelievable–my day to see!”

Many checkups, many tests, many cautions will be taken throughout the next year on Sithembiso’s eye. “I’m grateful that TLC is not going anywhere, and is here to help me keep seeing and healing.”