US Medical Students Submerged in TLC, Come out Refreshed

Integrate six students from an Ohio medical school into The Luke Commission team for three weeks, and their insights abound with unforeseen discernments.

In the end, it’s just plain fun to listen to what they’ve noticed on the Miracle Campus and at outreaches. Even their own personal stories weave an international tapestry of dreams and upbringings that are worth sharing.

The medical school students featured below are all from Wright State Boonshoft School of Medicine.

Logan, 27, from Ohio, said: “We’re going to miss being here and the family-like feeling. Whatever our expectations were, they were far exceeded.”

Logan is thankful for “how much clinical experience we received. I assisted in surgery, made rounds, and helped diagnose. I shadowed the doctors and sometimes participated, when there was a need.”

Although Logan is not thinking about living permanently overseas, he does want to incorporate global health trips yearly. “I’m greatly impressed with how much happens on the Miracle Campus. It’s all very complex.”

Musunga moved from Zambia to the States in 2002 at the age of 10. She’s 27 years old now and lives in New Jersey with her family when she is not studying medicine.

“I saw too much,” Musunga said of Zambia. “As a child, I went to more funerals than I did birthday parties or weddings. It was not disclosed what people were dying of at the time, but we figured out it was HIV when were got older.”

Continuing quietly but with passion in her voice, Musunga noted: “I appreciate not just TLC’s comprehensive approach to HIV. TLC is doing so much more than decreasing the incidence of a disease by employing so many orphans and giving them a place to call home. Many do not have family members except TLC. To see this is a powerful experience.”

Musunga “loved TOB” (TLC’s inpatient hospital ward). “The first day I saw it, I was brought to tears. I thought back to 2002 when people died with no one around them. They died without being loved.”

“TOB was meant to be. If patients do not recover, they are given a few beautiful days. If they do recover, they leave. Either way, TOB is a place of hope.” 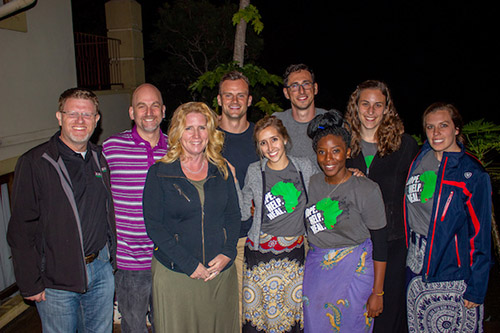 Musunga said Echo VanderWal, one of TLC’s executive directors, reminded her of her own mother. “They both know how to treat people as humans.”

The Base Camp training program, a prerequisite for possible employment at TLC, “blew me away the most,” said Musunga. “When you understand what AIDS has done to families, the generations being raised by grandparents or by each other…”

Continued Masunga: “They don’t have places like Base Camp to unpack their sufferings. TLC recognizes that you cannot fill other people when you are only half-full yourself. Base Camp creates a space to face your burdens, a space to unpack and reflect. Grow and learn. Process all the hurts they have undergone in order to start the healing process.

“Base Camp is most powerful. I’ve never seen anything like it. You could take this program anywhere in the world to make better servants,” Musunga noted.

“I’m grateful you have continued to answer the call and push beyond your own limits. That’s hard to do.”

Musunga wants to go back to Zambia but knows the challenges.

“From a medical student’s perspective, I love that TLC trusts us to have time with the patients. You let us into your space and allow foreigners to experience the patients.” For instance, Musunga said she had to stop and reflect when a VIA procedure showed a lady with late-stage cancer. “Personal and professional growth usually does not happen this early of medical school.”

Joshua, age 28, was born and raised in South Africa. After attending high school in Johannesburg, he traveled to the United States to study engineering. Graduating from college, he worked four years as an engineer but then changed directions and entered medical school. He’s in his second year.

“My mother is a nurse,” Joshua explained. “I spent a lot of my childhood in the clinics where she worked. I saw the underprivileged and underserved. That’s what motivated me to go to medical school.” 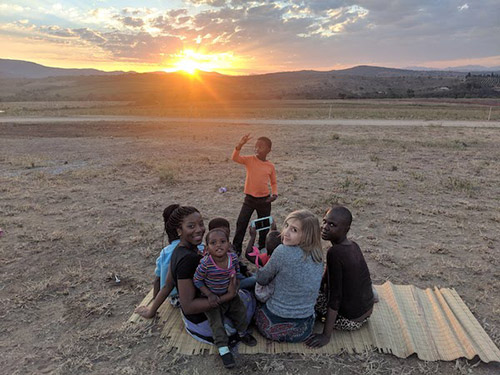 A couple students made it a habit to watch sunsets on Sunday with kids on campus. “Both the children and the sunsets were breathtaking,”said the visitors.

His mother has moved to the US and lives with her son. Joshua’s father left South Africa during apartheid because “he did not want any part of it.”

Joshua’s father gave him this advice, which Joshua remembers: “Keep your wits about you.” He sees his dad often.

As for his time in Eswatini with TLC, Joshua said: “I’ve had opportunities here that I never could have elsewhere. I learned to suture in the surgery department. And in Room 2 at outreaches, I practiced my Siswati.”

Pausing, Joshua added, “I saw rural areas that I had never seen before and only heard about.”

Most touching to Joshua was the “general family-type environment here. Everyone is for each other.” While shadowing the doctors on campus, he was also impressed with the “compassion they had with patients regardless of language barriers. Sometime they worked 12 hours. Thinking and doing for ‘every last one’ is a cool experience.”

Sierra, 26 years old from Maryland, said of her time with TLC: “It has been one of the best experiences of my life. Being here has given me so many new viewpoints that I will cherish always.”

When asked what sticks out the most, Sierra answered with no hesitation: “The community at TLC, prayer circle, all-night prayer, and that work is enjoyable because everyone is content.”

One improvement Sierra suggested was instituting electronic medical records. “Coming from the U.S. standpoint,” she noted, “ you could see patients in a more effective manner.”

In fact, TLC already had electronic medical records (EMR) in the development process, and began using EMR just a few months later. The program was developed by TLC staff members specifically for the needs of patients in Eswatini.

Recalling the “awesome staff who were very welcoming,” Sierra said, “That was good for our team.”

Ilana from Ohio has a Jewish name. She was named for her grandfather who passed away the day she was born 24 years ago. 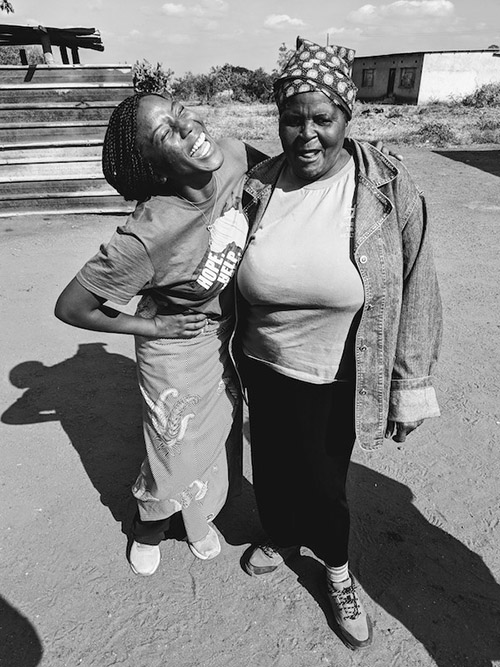 This Swazi community leader greets Musunga in a TLC Compassionate Care home visit. “Everything about her reminded me of my own grandma and the role she played in my life and in her community,” Musunga said.

Ilana liked the “sunrises and sunsets. Every building has multiple purposes,” she noticed also. “The Luke Commission can adapt and change. Every day is different.”

What most touched Ilana is that TLC operates with 98% Swazis. “This is the most sustainable model for global health,” she said. “TLC seems to really listen and understand the needs of the people.”

Illana thinks it’s “especially heartwarming to see this community. At morning prayer circle, TLC’s DNA and core values are recited. The whole team reflects and regroups for the say with the same intent.”

Noting the healing power of unity, Ilana said: “The spirit and unity of the people we worked with heals staff, patients, and the country as a whole.”

Back to her training here, Ilana added, “I learned a lot practically, but also how to be a visionary and keep going with things get tough.”

Stephanie from Ohio was surprised that The Luke Commission had a place like TOB. “In many ways, it’s palliative care. Patients can die with dignity and faith. The church services touched me, too.”

At age 26, Stephanie appreciated that no one was sent away from the Miracle Campus if they needed to be hospitalized.

“On campus, I felt like I was in a bubble. Then at outreaches, I liked interacting with those patients.  I felt like a practicing physician, while learning about culture, global health, and assisting in surgery,” said Stephanie.

“My whole time here was an incredible experience,” she explained. “It’s a beautiful campus and a beautiful country. The Luke Commission is very unique and well managed. I’ve never seen anything like this.”

Stephanie paused, and then added, “TLC keeps thinking of new things and trying them. I want to live like that.”

PS: These six students came to The Luke Commission in 2019. At this writing, another group from Wright State Boonshoft School of Medicine is in the middle of a two-week visit to the Miracle Campus.