When the Lights are Bright, But You Can’t See 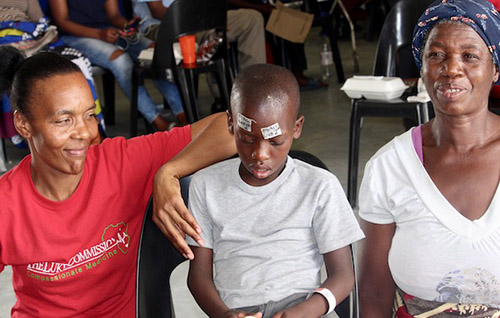 Mancoba was waiting to go to surgery. “I’m hungry,” he told his gogo (grandma), Lomlindelo. She explained he would have food after his operation. Thus, grandmother and grandson waited, one calm and unruffled, the other cantankerous and jittery.

Indeed, TLC medical staff bustled around Mancoba and Gogo Lomlimdelo. It was another fast-paced CARES (Comprehensive and Restorative Eye Services) surgical session, when eye specialist doctors visit the Miracle Campus from the US to perform cataract and other vision operations. “It will not be long now,” a TLC staff member said.

TLC staff member Rebecca explains to the young patient and his grandmother what to expect during the procedure.

Mancoba was born with congenital cataracts. These cataracts blocked most of his eyesight.

The TLC team planned to perform a procedure called phacoemulsification to remove Mancoba’s cataracts. Once they removed the cataracts, they would insert tiny new lenses in his eyes.

TLC staff member Kevin explained that the boy’s vision was first addressed in October 2019, when he came for HIV testing and counseling. He was asked to return to the Miracle Campus for further testing on November 22.

“As soon as we saw the problem, we knew we needed to get him in,” said Kevin. 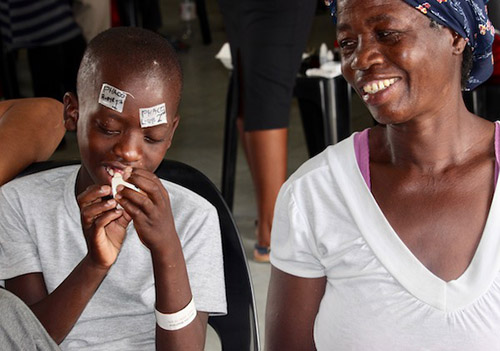 Their smiles may show a little apprehension, but The Luke Commission medical staff specializes in putting eye patients at ease.

Less than a week later, Mancoba was one of more than 150 patients and their caregivers to be housed and fed and prepared for eye surgery.

Grandmother Lomlindelo talked about her grandson with concern and love…

Mancoba’s mother died when the boy was six months old. She had been raped, so she did not know the father, and “he has never come forward,” explained Grandmother. She has raised him ever since.

Lomlindelo had eight children. Five are still living. She is married, and her husband works in South Africa as a herdsman. 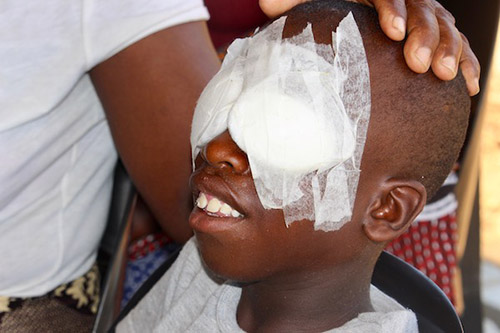 After surgery, Mancoba’s eyes are covered for a day. It’s a little dark before the dawn.

“I met The Luke Commission when they came to our area far away,” she remembered. “They helped us with medicines and doctors who listened to us, but I did not know they could help my boy’s eyes.”

The boy acted afraid, but he did sit when his grandmother told him. He still shaded his eyes from the afternoon sun coming through the open doors of the pre-surgery area. “I will be glad when I can see,” he said. “I want to see.”

Some TLC medical team members expressed concern that even after the cataracts were removed from Mancoba’s eyes, his brain might not adjust after so many years of impaired vision. 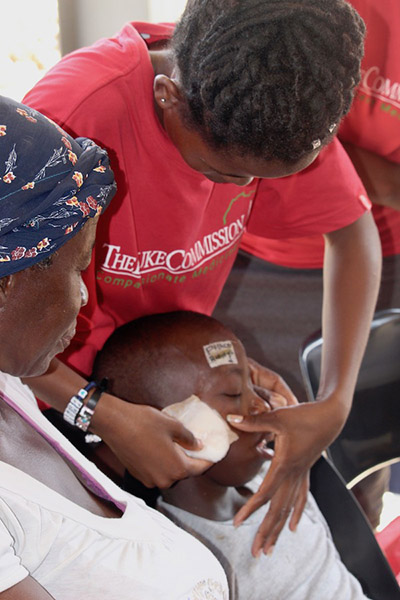 Dr. Alex Cohen, who performed the cataract surgery a couple hours later, said that Mancoba “cried and screamed when the medical team put an IV into his arm but later walked into the OR with no one leading or holding him. I liked that,” smiled Dr. Cohen.

The next day, Mancoba was one of the last of 23 patients to have his eyepatches removed. Again, he was antsy, although much calmer than the previous afternoon.

When TLC staff removed his patches, he hesitated to open his eyes. Then slowly, he looked down at his hands, apparently to see if he could see them.

“I’m very hopeful about the outcome,” said Dr. Cohen, as he watched the boy. 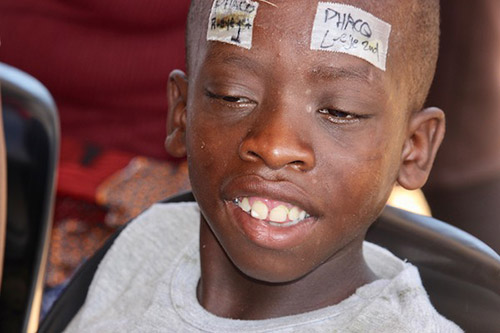 Moments later, Mancoba gives a thumbs up to a boy about his age watching the unveiling. That tells everyone the young patient can see!

Mancoba blinked. Smiled. Looked up. A couple minutes later, he returned a thumbs-up sign to an observer who had “caught his eye.”

Then he told his grandmother with a big grin: “I’m hungry.”

Later in the day, Mancoba walked all around campus, flashing big grins and his new sunglasses.
(by Janet Tuinstra)

PS Like all TLC services, eye surgeries through CARES are offered free of charge to patients throughout Eswatini. TLC medical staff at the Miracle Campus will follow up Mancoba’s progress in the weeks to come.