Snake Bites Him as He Sleeps—Then What? 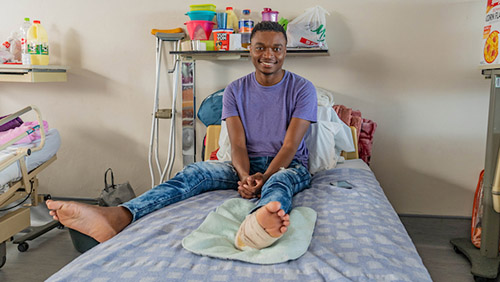 Swazis learn at an early age to coexist with dangerous snakes. However, when the snakes stray into human territory, it’s simply not good.

Neliswa felt the bite on his left ankle, not once but twice, of a snake. Poisonous snakes are plenteous in Eswatini.

It was very hot that evening, Neliswa remembers. Therefore, he and a friend sat outside with the door open.

“We stayed up late. I went inside and shut the door without checking. I think now that the snake was hiding in the washing basket. I climbed into bed…”

“Early in the morning, I first felt fear that maybe there was something in the house, but I continued sleeping. I woke up in great pain when something pricked my ankle. I saw the snake in my bed.  My foot was bleeding. It felt like I had been stabbed with a sharp screw driver,” says Neliswa.

“I jumped up and ran outside and washed the wound.”  He hurried back inside and told the other young man sharing the room that a snake just attacked him.  “But he didn’t believe me. I moved the bed, and there was the snake hiding in the shelves behind the bed board.” 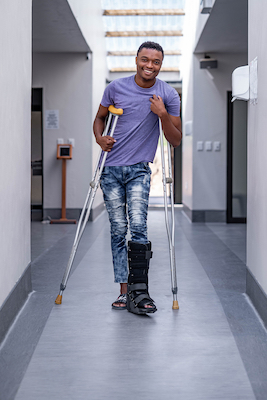 Neliswa walks around the Miracle Campus on his crutches. Here he is getting his leg checked at TLC’s newly-completed hospital ward.

It was a Mozambican spitting cobra about 90 centimeters (3 feet) long. Poisonous, for sure.

Neliswa rushed to a neighbor’s house and called his stepfather, who took him to a small private hospital nearby. By this time, Neliswa was vomiting. He stayed there for an hour, but the hospital had no antivenom.  “We did not have the money for me to stay there, even if they had antivenom,” he explains.

His stepfather took him to a larger hospital where he was given five vials of antivenom which depleted the hospital’s antivenom stock. Each vial costs about 1900 emalangeni (about $120). 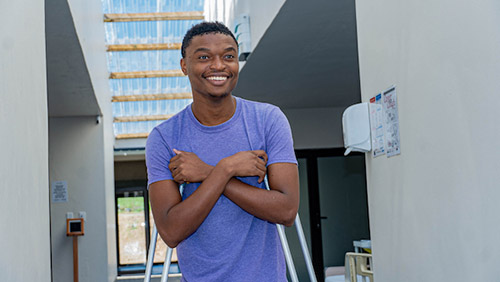 With a smile that shows his gratitude for past mercies and his hopes for the future, Neliswa lets others know that his “present” is just fine, too.

The next morning, Neliswa was transferred to the Miracle Campus. The Luke Commission has a reputation in Eswatini for treating snakebites without charge and for having an adequate supply of costly antivenom to fight the effects of the venom. At TLC, Neliswa received five additional vials of antivenom.

Neliswa was admitted to The Luke Commission hospital. By this time, his foot was swelling.

Neliswa recalled big blisters forming on his ankle. Then, the blisters broke, and necrotic skin became evident. “It was very smelly. The outside on my ankle itched and hurt all together. The bite on the inside of my ankle was deeper and hurt even more.”

TLC’s medical team sought advice from a snake expert in Eswatini, treated Neliswa’s wounds, and watched the foot closely. The poison traveled up his calf as his whole leg swelled. Ten days later, the TLC team arranged for an operation at a private hospital with a surgeon who would excise the dead and infected skin on Neliswa’s foot and leg.

“I could not sleep the night before the operation because the pain was so great. But The Luke Commission took care of everything for me and paid what I owed,” explained Neliswa. “I’m out of words for what has been done for me.”

Neliswa rests on his bed at the TLC hospital, which has become his home while his foot and leg slowly heal.

Following the operation, back at the Miracle Campus, Neliswa’s leg and foot were wrapped in wound dressings that were changed every three days. “The nurses and doctors were very nice and caring,” he says. “I went to three hospitals and had a taste of the others. TLC is best.”

Neliswa has been kept active walking with crutches and doing physical therapy exercises at the Miracle Campus hospital. He also likes to draw, so he has spent some of his healing time drawing.

His mother, Thandiwe, has served as his caregiver the whole time he has been in the hospital. He has had no other visitors because of COVID-19 restrictions.

Four weeks passed, and the TLC medical team arranged another surgery for Neliswa. This time his lower leg and foot needed skin grafts to cover the areas that had died and been cut away.

“I’m very grateful. I never would have gotten this much money,” said Neliswa. “Many people who are bitten by this snake have died.” 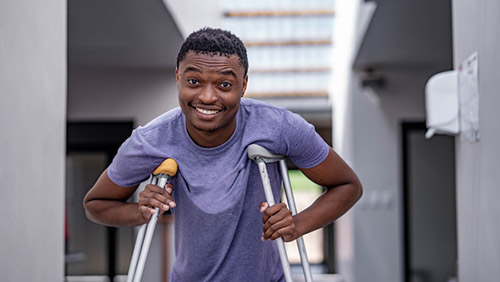 “My sincere gratitude for everything you’ve done for me,” says Neliswa to all who support TLC.

Last year he completed form 5, equivalent to the senior year in high school. Before the snake bit him, he did not have a job and wasn’t sure what he wanted to pursue. “I was still brainstorming,” he smiles. His English, which he says he was “forced to” learn in primary school, has served him well as he navigates the Miracle Campus day by day.

Shyly admitting that he has a girlfriend, Neliswa declares that he will tell his future children: “I hope you never have to experience this much pain.”

Thandiwe says she has never seen a hospital like TLC.

“Medication is given on time, and people come to check on my son even in the middle of the night. I have become closer to God here. He gave us The Luke Commission to take care of my son. I see God caring for us every day,” Thandiwe shared.