Third graders from Seattle Christian School collected hundreds of items they liked, because they thought children half way around the world would like them, too. 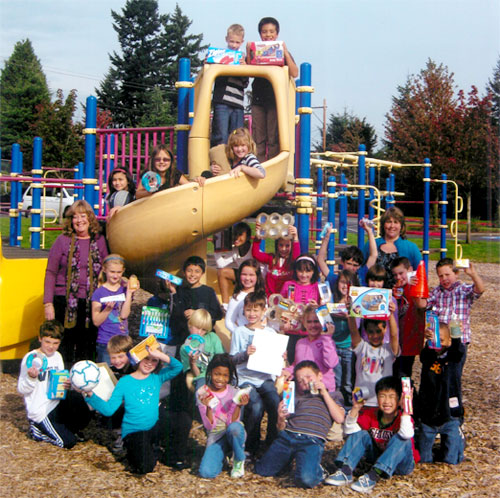 Third graders from Seattle Christian School happily display just a few of the gifts – practical and just for fun – which they collected for children in the Eswatini bush.  Mrs. Trish ZeBarth (right) knows the VanderWals and their desire to take medical and spiritual help to the most needy in southern Africa.

The autumn 2010 project was directed by their missions-minded teachers Mrs. Trish ZeBarth and Mrs. Janet Laudan.  Dozens of boxes were packed and delivered to The Luke Commission warehouse in Sagle, Idaho.

Those gifts from child to child will be loaded on a 40-foot container, shipped by freighter to southern Africa, and then transported over land to Eswatini.

In a thank-you letter to the 3rd grade class, the young Americans were reminded that Liswati children do not have many clothes or toys or books or personal belongings.

“But they are just like you,” the 3rd graders were told.  “They want to learn, to read, to play.  They live with their mothers and fathers, although many of their parents have died, so often they stay in huts with older brothers and sisters or grandmothers.”

The Liswati children will appreciate the gifts, the class was assured by Dr. Harry and Echo VanderWal and their team.

“We tell the Liswati children that Jesus Christ loves them and died on the cross for each one.  They smile, and sometimes cry, when they realize God loves them, even though they may be hungry and poor and sick.

“We tell them the gifts are from children who love this same Jesus far, far away.”

The Seattle children were encouraged “to keep thinking of others as you grow older, remembering what you already know is true: ‘It is more blessed to give than to receive.’”