Visiting the Sick in Eswatini – It’s Like Anywhere Else 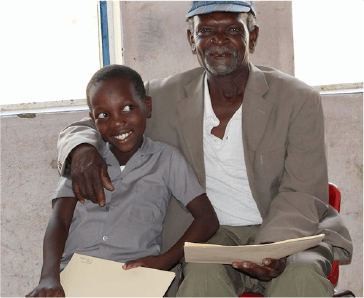 Hospital visits take on a new dimension in Eswatini. Here are some of the Emaswati we met there on “off days,” when The Luke Commission team stays in Manzini preparing for the next medical clinic far away in the bush.

Kal and I recently returned from Eswatini where we spent seven weeks working and visiting Harry, Echo and the boys. 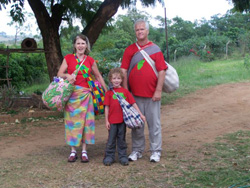 Loaded with gifts for the little hospital patients, Jan, Luke and Kal leave the mission yard…

Each time we visited patients in Raleigh-Fitkin Memorial Hospital, one of our grandsons accompanied us. We carried bags full of clothes, blankets, and diapers for newborn babies in the maternity ward and for children in the pediatrics ward. Jacob, Luke, Zeb, or Zion each packed his own bag with toys for the sick kids. (The triplets, by the way, turned 7 years this week, and Zion’s 4th birthday is today).

“Is it my turn to go to the hospital with you?” Luke asked us. “I’ve been waiting for you to come, so we could take the long walk to the hospital. It gives us time to talk.”

And talk we did. About the little boy who burned his crotch and legs and stomach after tripping into a cooking fire… He was bandaged and in pain, but smiled through his tears when Jacob gave him a truck. Jacob loves toys himself, so he took special care when he packed his bag to remember specific children in the pediatrics ward. 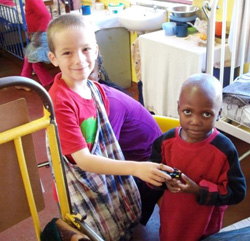 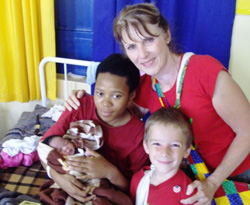 Jake gives toys to an orphan who has spent weeks in the hospital. The bottom half of his body is burned but slowly healing. He’s wearing a TLC sweatshirt.
We talked about the 8-year-old girl with fungus caked on the bottoms of both feet. She was brought to the hospital by The Luke Commission. Her mother, who looked like a sister, said her daughter’s feet had been covered with sores for 5 years. The young woman cared for her sickly grandmother, as well as the daughter she had borne at age 11.

Too poor to seek treatment, this mom said: “You have helped us when there was no help anywhere.” 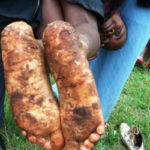 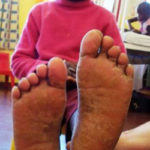 The girl, tended daily by her mother who slept nearby on the floor, spent several weeks hospitalized on antibiotics. The Luke Commission taught both of them how to soak her feet in Epsom salt three times a day. 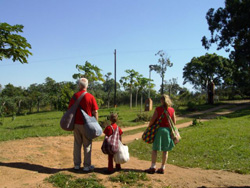 “So much of what we do in education,” said Harry. “We meet elderly people in the bush who do not realize their leg cramps and lightheadedness are caused by not drinking water for 2 or 3 days.”

On each trip to the hospital, we gave this girl and her petite mother another article of clothing and, after a month, new shoes and socks for the girl’s healed feet.

Wasn’t it fun to watch her jump and run in her new shoes?” said Zeb on the walk home. He demonstrated with a leap and a gallop.

Another sick girl touched Jacob’s heart. “Why is she in a room by herself, Grandma?”

“Probably because she has AIDS and tuberculosis. Hear that cough?”

“We told her about Jesus before, but let’s go in and pray for her again,” Jake continued. Gently holding her hand, 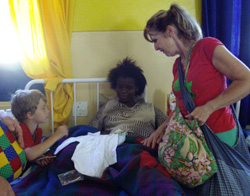 oblivious to germs and the girl’s sunken eyes, Jake prayed aloud as the girl’s mother watched. Two days later when we returned, she had died, and another contagious child had taken her place.

We greeted 120 mothers and children each visit. In the maternity ward, 50 babies are born every day. Mothers normally stay 24 hours, though they are required to care for themselves and their newborns. A mere 10 minutes after giving birth, we met mothers walking in the halls. 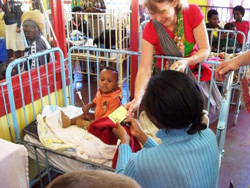 Thousands of booklets in SiSwati explaining the Great Physician are given out one by one. 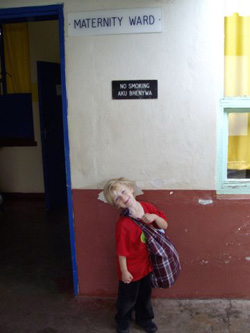 Children and their mothers in pediatrics ward. Zion loves to visit “my babies.”
“What’s all that blood, Grandpa?” Luke asked one day as we moved from bed to bed.

“We’ll explain it when we get outside,” answered Grandpa.

Thousands of booklets in SiSwati explaining the Great Physician are given out one by one.

Luke continued to hand out booklets in SiSwati, which explains who Jesus was and why He came to earth. But Luke did not forget his question the second we walked outside…

Zion was a favorite among the nurses because he wanted to see the new babies up close. Emaswati believe babies must sweat to grow, so they bundle them in towels and blankets. The babies’ little faces were hard to see from a low position on the floor, so Zion climbed on the beds to get a better look.

If we saw only a towel wrapped around a newborn, we knew the mother probably had no blankets for her little one, so we gave her a blanket from The Luke Commission. 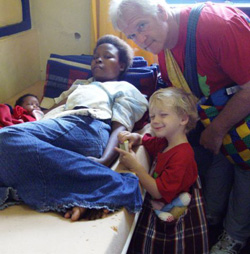 “Will you carry my bag for me, Grandpa?” Zion frequently asked. He took it back, though, when it was time to hand out the books, crayons, and balls.

Beds line the maternity ward about a yard apart. Scattered throughout those beds at any one time are two or three mothers whose babies are “late” – the Liswati term for death, like we would say a mother “lost” her baby at birth.

Kal and I asked if we could pray with the grieving mothers. Never did a mother say “no.” They grasped our hands, some understanding our English, many not understanding. But they knew the name “Jesu” and were visibly comforted. Languages and cultures are meshed by simply saying His name. Sometimes big tears slid down their beautiful black cheeks, but the quiet sadness is shared by their Creator.

Though we have spoken with thousands of new mothers, their reactions still surprise us. 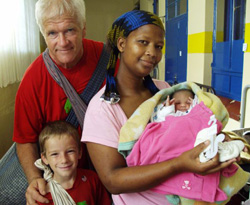 One young mother reached out to take tiny overalls and booties I gave her new baby boy. When Kal reached across my shoulder to shake her hand and to congratulate her, she drew back protectively clutching the soft, new clothes. She feared Kal was going to reclaim the gift, and we realized anew that Emaswati are not used to simple acts of compassion.

The maternity ward is usually a happy place, because the women are relieved to have the birthing process behind them and finally to hold their precious newborns. Even the mothers in the ICU, which is little more than cubicles with space heaters, graciously accept clothes for their babies that weigh one or two kilograms (about 2 to 4 pounds). They read the salvation booklets from cover to cover. 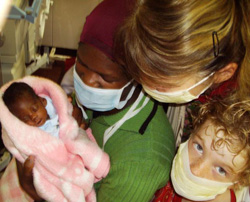 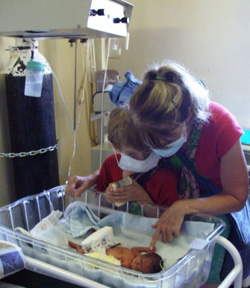 Babies weighing 1 kilogram (2.2 lbs) must breathe on their own in a heated room.
Babies in the pediatrics ward are often dying from malnutrition or AIDS. Their mothers or grandmothers tend them day and night, so we gave them Bibles to read in the hours before the dawn… Older children are often in traction from severe bone fractures and other accidents. 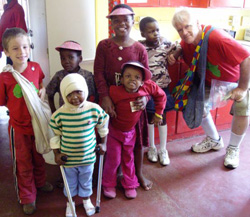 All these young patients are
wearing clothes from TLC.
Echo noted, “We’re probably only seeing the tip of the iceberg. The HIV virus can lie dormant for 10 to 20 years. Babies and children do not usually survive as long. The death-toll from HIV-AIDS is really just starting to manifest itself.”

Meanwhile, God manifests Himself in this tiny African country. And for that we are grateful. May Jesus Christ be praised!

Janet Tuinstra for The Luke Commission