Meet Beverley, Eswatini Administrator, Who Lifts Up Harry and Echo

The Luke Commission’s new Eswatini Administrator Beverley Dankers views ministry through the eyes of someone whose life has been difficult but full of Jesus.

Asked recently what God wants her to do at The Luke Commission, Beverley answered: “Make things easier, so Harry and Echo can do what they love to do – take compassionate care of patients and lead TLC to expansion and replication.” 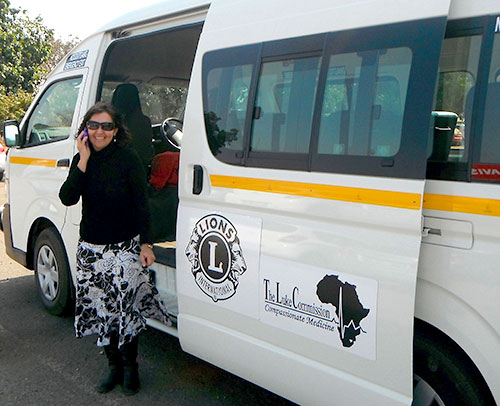 Beverly Dankers has lived and worked from South Africa to Texas, but now she’s back in Eswatini using her knowledge and experience for The Luke Commission as administrator and staff coordinator.

She continued, “I’m new here; therefore I’m still looking and learning. I want to lift up Harry and Echo. Then they can concentrate more on strategy and vision for TLC’s future and growth, as well as treating patients medically.

“Family is important. I’ve had mine. Maybe I can give them opportunity to be with their boys and their baby as well as serve the people of Eswatini and beyond.”

Bev comes highly recommended. TLC’s Eswatini board chairman Frans Pienaar, who is the CEO of a Liswati construction company that spreads into five South African countries and employs 2,500 people, has known and appreciated Beverley for years.

The VanderWals’ advisers in Eswatini say such a person as Bev in such a position is long overdue.

Her job title is Eswatini Administrator. Even though, her job description is still evolving, it hasn’t slowed Beverley down as she jumped into knotty administrative and staffing issues, as well as day-to-day logistics.

“We’re not sure what we’d do without her,” said Dr. Harry VanderWal. “Echo and I can no longer handle the leadership here alone. We have strong advisers, for which we are grateful, but we need someone in the office every day who walks each step with us.” 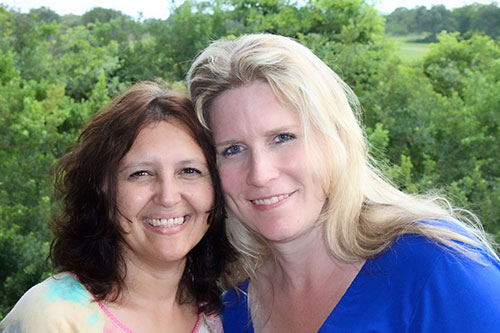 Bev caretakes Echo, so Echo can caretake the mission and vision of TLC, moving toward expansion and replication.  Though still young herself, Bev protects and “mothers” the VanderWals, as well.

Beverley grew up and started serving Jesus in Cape Town, South Africa, but has lived in Texas and in Eswatini.

As part of a team from the U.S., Canada, and the Congo, Bev worked in Cape Town. She participated in mission trips to Namibia, attended a ladies conference in Kenya, and traveled to Zimbabwe, Zambia, and Botswana.

“I’ve always been in ministry,” said the former pastor’s wife. And thus her life’s story develops.

“Just this morning I was thinking about a passage in Isaiah that says we sometimes don’t know what the Potter is doing. I never thought I’d come back to Eswatini,” Bev smiled.

“But I do know as long as we’re seeking Him, no matter what’s going on in our lives, He’s faithful.”

For years, Bev served with Bible Study Fellowship International. In Cape Town she cared for inner-city kids and at times lived in the rough, troubled areas.

She and her husband sold their house when he was accepted at Abilene Christian University and moved to Texas, where Beverley volunteered at the Christian Service Center for homeless and disadvantaged. At church she organized meals for 600 people once a month with a team of 30 volunteers.

Then the couple moved to Eswatini, where he taught at African Christian College, formerly Manzini Bible School.

At the college, Beverley started a cafeteria program so all students and their families could receive three meals a day. Families routinely live on campus while husbands and fathers attend Bible college. “Providing meals was a way to ensure that everyone stayed healthy and had enough to eat,” said Bev.

“I’ve had a part in educating women from several African countries, worked in Christian education, fed orphans, and had fun teaching preschoolers,” explained Bev. “I enjoyed working with so many cultural backgrounds.”

Then her marriage fell apart. That was five years ago.

Alone, Beverley left Eswatini and went back to college at Cornerstone Institute where she earned a Bachelor of Theology degree majoring in Community Development. She also recently earned a Bachelor of Social Science honors degree majoring in Development Studies at the University of Cape Town. At Cornerstone Institute Beverley received the President’s special award for displaying all the college’s core values.

Though her list of accomplishments is impressive, Bev is friendly but quiet, determined but unassuming.

She has two children, a 22-year-old son who is studying civil engineering at Pretoria University in South Africa and a 27-year-old married daughter who is a graphic designer in Cape Town.

“Life has not been easy,” Beverley concedes, “but God has been beyond faithful. He is a God of providence. He provided funds for my education, a place for me to study, and food for me to eat. Even when I’ve been faithless, He’s been there constantly.” 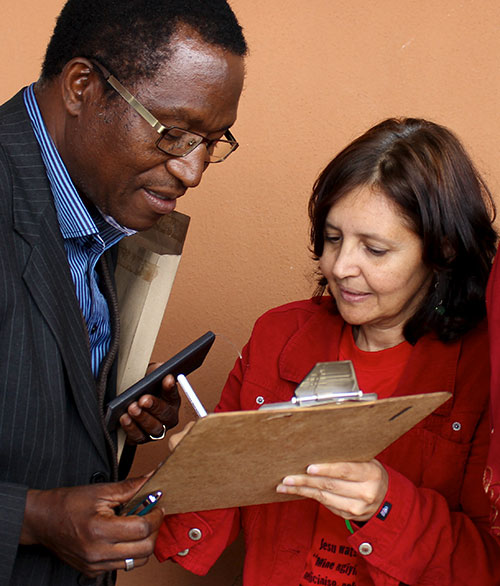 Bev obtains the signature of a Liswati leader, who will make certain his community is notified and prepared for the TLC mobile hospital to come to his rural area soon.

“We don’t always get what we wish, but in the end if He gets the glory and we can be of service to Him, what more is there?” she wondered aloud. “I have so much for which to be thankful.”

Bev admits she’s a little uneasy about breaking into the “working, business world with The Luke Commission, because I’ve always been in other parts of ministry. This is both frightening and exciting,” she said of her new job.

As an aside but a glimpse into exactly who is this new member of The Luke Commission, Bev refers to herself as “colored, not black and not white, a little bit of both, I guess.”

Both her parents are colored, too. Her mother’s grandfather was German.

Bev’s grandmother was a Muslim until she married and became a Christian. Her mother has served the Lord since Beverley’s childhood, while her father has struggled as an alcoholic for many years and is currently battling with his health.

Bev notes, “Mom is still faithful to him and to God.”

Her mother’s only childless, widowed sister had a stroke 13 years ago, and over the past few months she has had to care for her fulltime after she fell and broke her hip. “I do think about them often when I’m so far away…” Cape Town is 18 hours or almost 1900km from Manzini by car.

“Thinking about my purpose at the Luke Commission, for now,” Bev said, “I would say I’m an ‘Aaron’ or a ‘Hur’ to Harry and Echo.

“I may not be in the field with the team fighting for the health and the lives of hundreds of people in rural areas, but I can hold down the fort and be what they need me to be,” Bev mused. “Then, Harry and Echo can be who God has called them to be in bringing compassionate healing to the rural people of Eswatini and beyond – even to other southern African countries.”

“As long as Moses held up his arms, the Israelites won, but when he put his arms down, the Amalekites started winning. When Moses’ arms grew tired, Aaron and Hur brought a stone for him to sit on, while they stood beside him and held up his arms, holding them steady until the sun went down. In this way Joshua totally defeated the Amalekites”. (TEV)

P.S. Now 10 months later, after this article was written, Harry and Echo say Beverley has assumed 80-90% of the administrative duties they were doing just one year ago. “It is unbelievable,” notes Echo. “It is completely and totally different and amazing for us. Bev operates with such a sprit of humility and teachability. She has absorbed and grown at a rate of one year for every month of service. This has translated to immense growth for TLC. We are finally in our sweet spot – leading, visioning, and strategizing for the current and future growth of TLC and treating patients in the field. These two functions have been the cries of our hearts for many years, but details have kept us from fully focusing. Bev has released our hands to be able to do exactly what God has called us to do. We are beyond thankful for His faithfulness.”