When Jesus shows His face in the faces of others, all our lives are enriched.

That’s what happened yesterday with the Liswati staff of The Luke Commission.

Let’s back into this story – start from the end and inch toward the beginning.

Luke Commission Co-director Echo VanderWal called the Liswati team, administrator, and a few American staff members together for a meeting. That’s not usual. In fact, Echo had been in meetings with staff leaders all day. But what transpired at this late-afternoon gathering was a first in TLC history.

“The Luke Commission has been especially blessed lately,” Echo said with a smile that suggested more to be told. Our donors have been more than generous. We’d like to pass that blessing onto our staff for your years of sacrifice.” 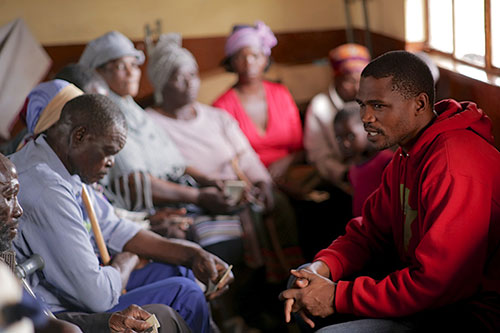 “This year so far the unity among that staff has been great – despite record numbers in all departments,” complimented Harry. “I see people getting up and doing what needs to be done. Your leadership shows the rest of the staff how to work, how to ask questions and get answers, how to work together.”

In the first quarter for TLC this year, some 11,000 patients have been treated, 21,000 shoes given to school children, and almost 500 men and boys circumcised. Record numbers under God’s favor…

All of the Liswati staff members will receive a “blessing bonus” on their next monthly paycheck, Echo explained. “And because of your leaders’ responses today, you will receive a double portion of blessing.”

Let’s meet those Liswati staff leaders – Thulani Thomo, Phumzile Msibi, Tholakele Gama, and Sizwe Matsenjwa – who were put to a test yesterday and passed, as expected, with spiritual flying colors. 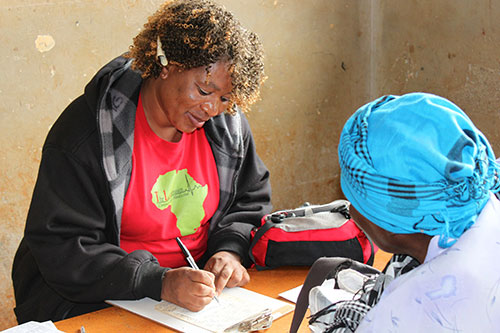 Happily registering patients is Tholakele Gama, who patiently waits for her fellow Emaswati to tell their stories, both medically and spiritually.

“I want to know how you think we should split up this monetary blessing,” queried Echo at a meeting earlier in the day. The 25-person Liswati team is made up of 2/3 “permanent” employees and 1/3 “casual” employees.

“Casuals” are new employees-in-training who may or may not be offered fulltime positions. The real question being posed was whether the casuals should receive as big a bonus as permanent employees, who have been with TLC through thick and thin.

Unlike normal Liswati reactions, in which each waits patiently until finally someone speaks, each leader answered immediately with conviction.

“This blessing should be evenly divided. You can’t value one part of the body over another. The hand needs the foot,” said Phumi. 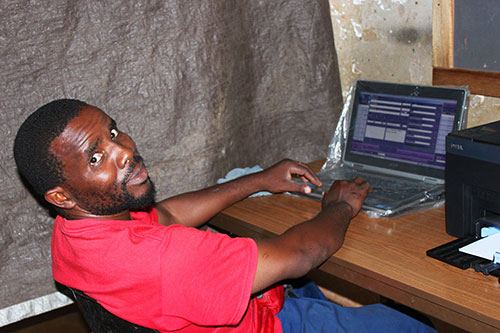 Like all TLC’s Liswati leaders, Sizwe Matsenjwa wears many hats.  Here he takes x-rays for everything from suspected broken bones to swallowed coins.

“Let the rain rain on everyone,” added Sizwe.

“It’s obvious,” noted Thulani, the team’s pastor, “something that is called a blessing should be spread to everyone.”

“The casuals are part of us, too,” said Tholie. “I’m so happy and wish to share it among the whole team.”

What about merit pay or longevity or the expectation from “casuals” that this will happen often (which it probably will not)?

“Without unity, we can’t reach our goal to serve all the rural people in Eswatini,” continued Phumi. “We must pull together, so we can shine brighter.”

Thulani added, “I want to voice that it’s by God’s grace we are receiving this. He deserves the credit.”

“Your responses are just what I expected,” said Echo. “Working with all of you these many years continually humbles and touches me. I appreciate so much that you do not complain or grumble and are always willing to accept correction. In turn, I learn from you. I see Jesus in you.” 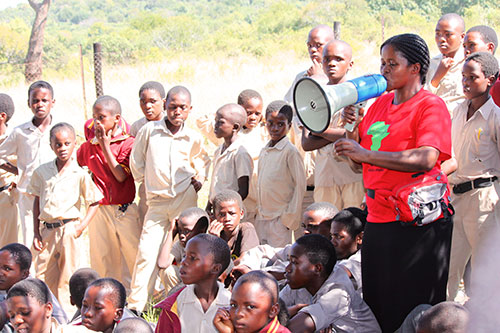 Phumzile Msibi educates boys, cares for the elderly, leads by example, and takes great joy in serving her Savior at The Luke Commission.

Previously, Harry and Echo had decided that if the four Liswati leaders opted to share their “blessing bonus” equally, “we would double the blessing of all permanent workers.” However, Echo said to the leaders, “If you had decided to give yourselves or the permanent workers a larger portion, we would have given you the original blessing amount.”

Why the “bonus blessing” right now and not a little later, as originally planned?

“I love the way God works in our hearts,” noted Echo. “He told me at the clinic yesterday that now what the time.”

All day at the clinic, when 650 patients were treated, 30 men and boys circumcised, and 800 students received new shoes, it looked like to might rain. It didn’t, however.  But when darkness set in with the night, so did rain.

The downpour continued. Some patients still waited to be treated by Dr. Harry; some boys still waited for their operations in the MC department.  Many patients stood in line to receive their medications; some waited patiently for all activities to be completed to receive Bibles in SiSwati.

Three hours later, the staff began to tear down the departments (which now numbers rooms 1-9), to pack up all mobile “hospital” parts and pieces, and to load the trailers – all in the wet and mud.

With water dripping from his hair and jacket, one of the staff members walked into the MC department to gather another load of supplies and equipment.

Echo, who had been concentrating in surgery, understated: “It is raining hard.”

“It’s not rain. It’s a blessing,” he replied cheerfully.

“That’s when I knew it was time to extend another blessing,” said Echo. “I did not hear one complaint as everyone worked in the rain.

With an emotional catch in her voice, Echo continues: “I saw the staff helping each other, slipping in the mud and shivering, but working together embodying the way Harry and I have watched them work for so many years – no obstacle too big, no challenge ever breaking resolve, no setback leading to grumbling or complaining. I was blessed…”

– By Janet Tuinstra on the field with The Luke Commission

PS Here are a few other insightful comments from the April meetings:

“You know when your parents are plowing, you don’t ask for shoes,” said Thulani Thomo.  He was expressing his surprise and gratitude that at a time the TLC directors were so busy with the new land but still thinking of the staff.

“Thank you for bringing food on our tables,” said Fauna Hurube, a new employee.

Another “casual” Nokwanda Myeni said quietly, “I thank the Liswati leaders for thinking of me and teaching me. I want to learn and be with The Luke Commission a long time.”

“If a snake crawled into your child’s bedroom, what would you do?” asked Echo. “Kill it,” was the unanimous reply. “TLC is all of our baby,” continued Echo. “We protect our baby. We do not kick or neglect our child…”

“I’m opening another page,” declared Nathi Mkhonta. “We must split equally with the young ones. God is the one giving Harry and Echo guidance. His hand is open to us.”

“TLC must grow up, up, up,” declared Dumsile Thwala.

“Thank you to the directors for taking care of us. Let’s do our work nicely whether we receive a special blessing or not,” suggested Tholie.

“Sometimes we may step on one another’s foot, because we must work so close together every day,” admitted Phumi. “But if we drop a hammer on our foot, we do not quit working. We just rub our foot and go on.”

“I’m not afraid to say or to hear the truth with Harry and Echo,” said Sizwe. “We must all work on those things within ourselves that should be better.”

“Our Liswati team has never been more unified and taken more ownership,” Echo said. “We’re not talking about performance and success but about character and attitude. With strong character comes success, though. We are seeing God’s favor time and time again.”