Two Donated Buildings to be Erected on TLC Land

Two men from Colorado Springs have jumped into The Luke Commission’s Miracle Campus project with both feet and lots of expertise.

The dynamic duo of Ken Driscoll and Dan Schmidt from Colorado Springs, Colorado, are spearheading the construction of two large buildings on TLC’s newly-acquired land. Dan is the construction superintendent, and Ken is the donor who happily gets his hand dirty. 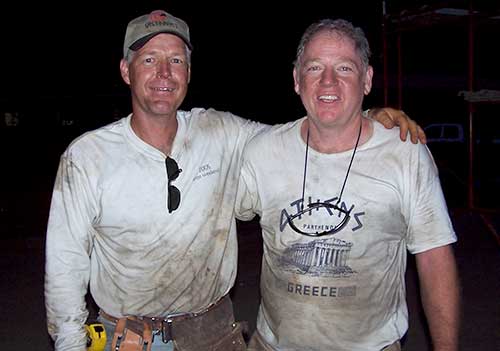 Four 40-foot containers, railroad cars in size, are being sent to Eswatini. One container left Honduras in mid-April loaded with equipment and tools Ken and Dan used on a missions’ project there.

Another two containers left May 15th from the United States with all that’s needed for TLC’s administrative building. On May 20th the fourth container departed from Colorado Springs with pre-fabricated materials for a large warehouse, as well as a skidsteer which will remain in Eswatini.

“It’s so very thrilling,” said Echo VanderWal, TLC co-Executive Director. “Even before we had all the funds to purchase the land, Ken and Dan contacted us and said they wanted to come over and put up our first two large buildings.”

On those donated containers are electrical and plumbing supplies, including exterior and interior lighting, toilets, sinks, hot water heaters, the works. Two kitchen additions are a 7 foot by 5 foot commercial refrigerator valued at $4,000 and an ice maker which can make 75 pounds of ice a day.

August 1 to 17 and September 5 through 20 are blocked out for on-site construction.

Dan is looking for volunteers from his church and anywhere else, although he cautioned: “It’s not easy work. Applicants need to be somewhat fit. It’s construction, not a craft show.”

Added Dan, “This is what I do for a living.” He travels to countries such as Honduras and Venezuela to build buildings and roads and even bridges for mission organizations.

In their service for Jesus Christ, Ken and his wife Rae started building overseas in 1984. “Mostly we work with orphanages and places like Teen Challenge,” he said.

In January, Harry and Echo visited Doug Olsen, Executive Pastor at Woodmen Valley Chapel in Colorado Springs. A few weeks later, Ken and Dan started looking for another project since they are finishing a complex in Venezuela.

“I talked to our pastor about The Luke Commission in Eswatini,” Ken said. “The timing was right, doors opened, I looked at TLC’s website and contacted Echo.”

Not only does Ken finance these projects, he actually helps build. “That’s the fun part,” he laughed. He has built or helped build 43 buildings on over 55 trips.

“We’re excited,” Ken said of his upcoming Eswatini visits. “We hope it works out well, and we get along with everyone.”

Ken noted that it’s more costly for volunteers to go to Africa than Central or South America. Also, he said, “It’s harder to get people to go these days. People are busier than ever.”

In years past, Ken has been able to draw on a pool of 200 volunteers but that’s down to 50 these days.

“Construction is not for everyone,” said Ken. “The work is hard, and the days are long. We like to get a building done and move on. We know our work will be appreciated long after we leave.”

Those interested in volunteering for either the August or September construction team may apply here.

During the August trip, Dan said, “We will be pouring concrete slabs, footers, doing excavation, and underground plumbing and electrical.” In September, the second team will erect both buildings.

Teams will be working on scaffolding, cranes, and rooftops. This is a construction project with some danger involved.