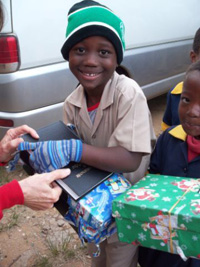 An unexpected responsibility has been bestowed on The Luke Commission in Eswatini. We are handing out 20,000 Operation Christmas Child boxes at bush clinics.

Echo was running errands in Manzini, zooming around in the Noah Kombi. All Emaswati zoom when they drive, we have learned.

“I had 25 things on my mind,” Echo laughed. “But you know how God changes our plans. I glanced at a truck I was passing and noticed a little sign on rear saying ‘Operation Christmas Child.’ It’s as if the Holy Spirit said, ‘Follow that truck.’ So I did.”

Echo met Pastor Zakes, a joyfully-sacrificing Liswati minister of the Gospel. Pastor Zakes has been entrusted with 100,000 shoe 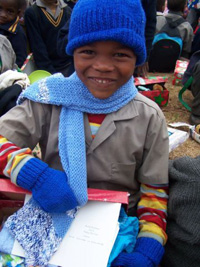 boxes filled by Christian children and parents in wealthier countries for children in poorer countries. But Pastor Zakes had a big problem…

Many TLC supporting churches in the United States and Canada pack shoe boxes every Christmas full of toys, clothes, toiletries, and candy for boys and girls from ages 2 through 14. Samaritan’s Purse ships them all over the world.

“While in the States we went through a few channels offering to distribute the Operation Christmas Child boxes at our clinics, but did not get anywhere,” Echo said.

Once on the ground in Eswatini, though, many possibilities become reality. Jesus opens doors, and the Holy Spirit works. “In Africa, people need to see you face to fact,” Harry noted. “Emails and phone calls don’t work here like they do in the States.”

Back to Pastor Zakes’ dilemma… He did not have the vehicles or the gas money or the personnel to get all the children’s gifts to the most remote areas in the Manzini region.

“Wel” take them to the rural areas,” volunteered Echo, that afternoon they met on the side of the road. 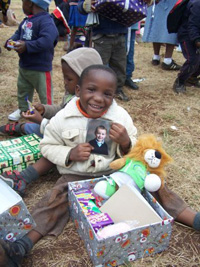 Consequently, The Luke Commission team now packs the smaller trailer with gifts and places each box in a child’s hands. TLC keeps records of recipients so no child gets two boxes in this year or next.

“When they see you unloading those gifts, the children wonder if just one toy from one box is for them,” Pastor Zakes explained. “Then when they see children in front of them are getting a whole box, they think ‘There probably won’t be enough for me.”

But enough there are. The children smile shyly and curtsy as they tentatively grasp their boxes.

These children, often orphans, have never received a birthday present or a Christmas gift, Pastor Zakes told us. 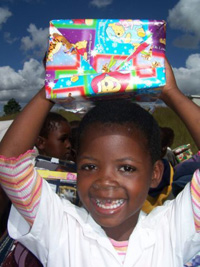 Hundreds sit together on the ground, waiting expectantly. We explain that each gift is a picture of the gift Jesus gave us when He died on the cross. Every child receives a salvation tract in his language. We lead the children in prayer, then say “Open your box from Jesus!”

A delightful sound of collective surprise rises to the heavens, and we trust to God’s ears, when the children first lift the lids. It brings tears to our eyes and such thankfulness to be there at that moment in that place watching Jesus fulfill His words, “Let the children come unto Me and forbid them not, for such is the kingdom of heaven.”

Some children just sit there clutching their unopened boxes. The VanderWal boys wander through the crowd excitedly demonstrating how to use new toys. Luke, Jake, Zeb and Zion communicate without words and then move on to another child. 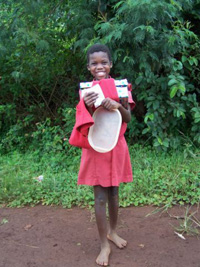 One 12-year-old boy wiped tears away as he discovered school supplies and a stocking cap.

Photos and coins found in the boxes indicate that most are from England, Ireland, Scotland and Australia. We have been touched by the number of handmade items people send – knitted hats, gloves, scarves, dolls. The kids gleefully put on their hats and gloves even if it’s 90 degrees. Emaswati love hats for chilly nights.

Some children immediately share their sweets. Others quickly close the lids so the contents will be kept secret. Still others show everyone what they have received.

Girls hug their new dolls; boys race their new cars. All eyes sparkle and mouths express gratitude. “Jabula, jabula” (happy, happy), they say. For a few moments, at least, these children feel as special as Jesus sees them all the time. 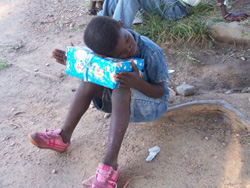 One girl told us she would share her new lip gloss with her mother. “Mommy likes to be pretty, too,” she said.

We noticed an older girl quietly crying. “Why?” we asked. “My teacher sent me on an errand far away. I have no gift.” Her tears quickly dried when we reopened the trailer and gave her a box.

One little boy reached out for his box, walked 10 feet, and placed it on another pile of boxes waiting to be given away. He was grateful to have just held the gift. He did not expect to keep it. 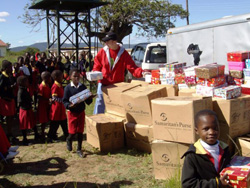 Impressed we are by the thoughtfulness that children and parents worldwide invest in their Christmas Child boxes. Practical items such as soap, washcloths, toothbrushes, and toothpaste are appreciated, too.

A 7-year-old boy took his box home and had his mother put it on the highest shelf in their hut. “Every day that little boy asks his mother to take Jesus down so he can play with Him,” Pastor Zakes said. “He calls his box ‘Jesus’.”

For those of you who have ever donated on Operation Christmas Child box, we say “thank you,” as do the children 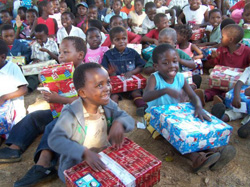 here who continue to receive them. Christmas in April? Why not. The Christmas story is for all months, all nations, all tongues.

We send our love and appreciation,
Janet for The Luke Commission