Nowhere Else to Go – Try The Luke Commission 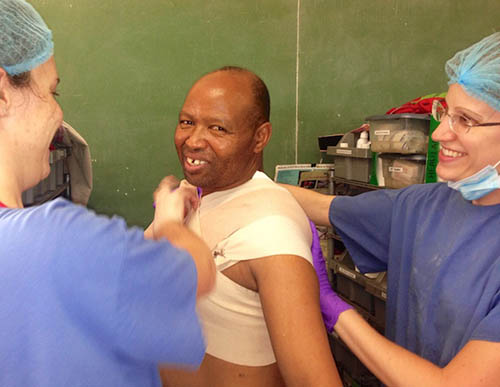 Some Emaswati endure a medical problem for years.  Then along comes The Luke Commission, and everything changes.

That’s what happened to Solomon Gamedze.  Just ask him.  He cannot wait to tell all.

The 55-year-old man had a large tumor (and a small one he wasn’t even aware of) on his back.  He first noticed it in twelve years ago.

“It was painful when working.  When my body was exhausted and stressed, I would get dizzy, especially when driving.”

Gamedze’s condition was complicated by diabetes.  “I saw quite a few doctors, but no one took off the tumor.  One doctor told me I would have to go under anesthesia.  Because I’m diabetic, I was afraid I would not wake up.”

Wondering “Where is a doctor who can help me without putting me to sleep?” he pondered, “What will happen to me?”

An educated forester who learned to speak English in high school, Gamedze works for the Ministry of Tourism in the environmental division developing and implementing policies in the capital city of Mbabane.

He first learned of The Luke Commission from Rogers Mamba, former Liswati Minister of Tinkhundla who is a member of TLC team.

“We used to go to the gym together.  He suggested I try the Luke Commission,” noted Gamedze.   “I heard many testimonies from those who had been to Luke Commission clinics all over Eswatini.”

One day at home, he heard a radio broadcast about an upcoming TLC mobile hospital outreach.  “I grew up listening to the radio,” he laughed.

“When I heard that public announcement, I thought, ‘That is me.  That’s where I’m going.  I’ll be there!  I have nowhere else to go.’”

Rising early, early the next morning, Gamedze traveled to the rural site.  “I was there an hour and a half before TLC arrived.  Only two women who had slept there all night were in front of me in the queue.”

Dr. Harry said, “I think we can take off that tumor.  I will discuss it with my wife.”

Echo conferred, “If a muscle is not on top of the tumor, we can cut it out.  Yes, you will be awake.”

What did this patient think about during the surgery?  “I was just relieved, thankful someone would help me.  I didn’t know what to expect, but I was ready to do whatever they told me,” he explained.

“Whenever I could feel pain, she gave me another injection.”

Gamedze only missed two days’ work.  “When the tumor was big and painful, I had to take many days off work.”

At his final check-up after surgery, Gamedze affirmed, “I’m grateful to the VanderWal family and to The Luke Commission.  The nurses are wonderful people, as are all my people working with you.  You are needed in rural Eswatini for health and for Jesus Christ.”

Janet Tuinstra on the ground with The Luke Commission