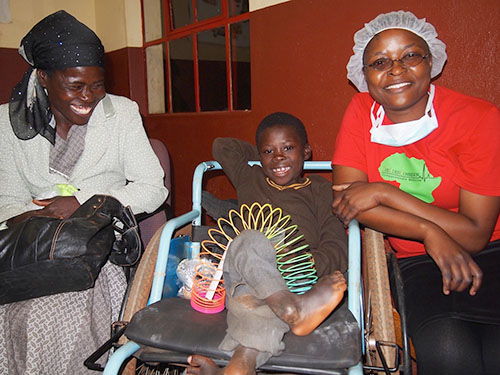 Mother knows best…even when she doesn’t know all.

Early in the morning, a young, handicapped boy was wheeled into Room 7 by his mother.  He looked both scared and excited.  His mother looked determined.

Room 7 serves as both pre-op and post-op area for the surgical department – the male circumcision “waiting room” where consents are signed, where HIV tests and blood pressures are taken for those being circumcised that day, where patients wait for their turns in Room 6 surgery unit.

Sensing that something was wrong with her son, this mother was the first that day to sign a circumcision consent.  She pushed her son’s wheelchair into Room 6.  The boy started to cry and didn’t stop.  Finally, the sympathetic TLC staff sent him back to Room 7 to stay until he was calm.

His mother talked, talked, talked.  The boy said he was afraid – afraid of white people, especially white doctors.  When he was young, white doctors had operated on his feet and legs.  Apparently the experience still troubled him.

Later, Echo came into Room 7 to tell the mother that her son had a condition called phymosis, a tight band of skin around the penis.

A relatively common occurrence in uncircumcised boys, phymosis is usually discovered and corrected earlier, if and where medical facilities are available.  An enhanced circumcision procedure was required.

“You are right,” Echo told the youngster’s mom.  “He needs to be circumcised for two reasons: to reduce the possibility of becoming HIV+ by more than half, and to fix a medical problem that will only get worse as he grows older.”

The boy continued to be frightened, not listening to the white lady, even through the gentle pleadings of TLC’s staff translator.

“Call Sipho,” suggested Echo.   As a longtime staff member, Sipho has talked through, around, over, and down difficult situations at The Luke Commission outreaches for years.

He softly convinced the upset boy to return to the operating room.  Sipho carried the boy to the bed and stayed with him throughout the surgery.

Fast forward a couple of hours, as the tears and fear turned to gratitude.  The boy smiled shyly.  His mother beamed.   Years of worry literally evaporated from her countenance.

“I’m very happy.  Thank you too much for helping my boy.”