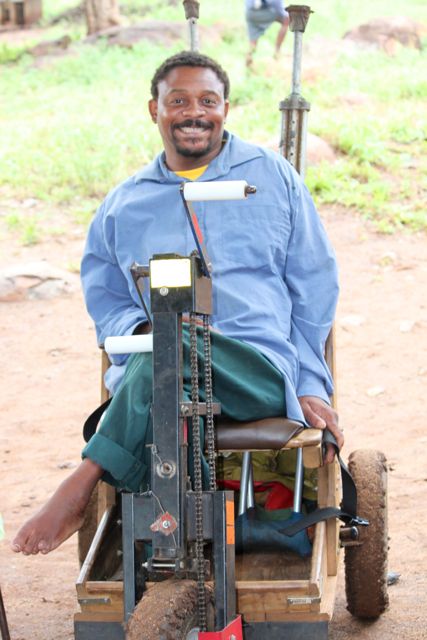 Dumsani Dlamini came to a Luke Commission mobile hospital outreach to see the doctor and hopefully to receive some medications for his aches and pains.

He came “driving” his PET cart, though the road was especially muddy that day. “As long as the chain in greased, I move,” he laughed.

The 40-year-old Liswati has not been able to walk since birth. Last year when TLC came to his community, he was given a PET so he could be a little more independent and move around on his own.

He did not go to school. He is not married. Twin sisters care for him, but one is not well herself. One has a baby.

Dumsani travels 3 kilometers a day in his PET cart.

“This type is good for me,” he said. “I have another type of wheelchair that has small wheels and is not so good on my homestead.”

Dumsani also has learned to use crutches to go ever-so-short distances. He “pedals” his PET with his hands and arms.

“Thank you for helping me,” he repeated several times, after Dr. Harry treated him and TLC team greeted him.