Her Blindness Opens Other Eyes 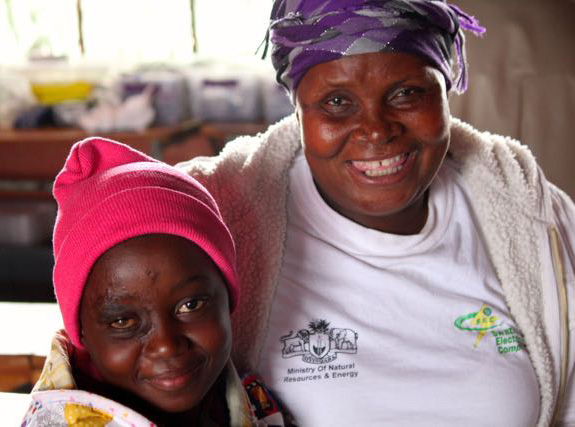 The compromised, poor vision of a Liswati orphan opened the eyes of The Luke Commission staff to her whole family’s health needs.

Ntombikayise Khoza walked to TLC’s mobile hospital outreach high up in the mountains of Eswatini. She didn’t want anything special, she said. “I just wanted to watch.”

The doctor noticed her among hundreds of schoolgirls. Scarring surrounded Ntombikayise’s right eye – the result of herpes, the result of HIV. The damage was done. She was blind in that eye; but the herpes was not actively growing, the doctor noted as he sent her to Room 9, TLC’s vision department.

The staff tested the 15-year-old girl’s left eye. It was still healthy. “Contact us immediately, if you feel any more changes in your scarred eye or if anything happens in your good eye,” said a Liswati member of the TLC team.

This is only the beginning of Ntombikayise’s story, of her day with The Luke Commission, of our day with her entire family.

Small and much younger-looking than her 15 years, Ntombikayise said her eye problems started three years ago. She was only in grade 2 when the eye became blurry and throbbing. Eventually the pain stopped, but so did the ability to see from that eye.

First, her father died in 2010, and then her mother passed away in 2011. Jarred by these deaths, Ntombikayise’s grandmother had her tested for HIV. Not surprisingly, the child was infected with the virus, which still afflicts many Emaswati. Since her CD4 count was low, Ntombikayise was started on Anti-Retroviral Therapy.

“She was bold and brave to tell us she was on ART,” said a TLC staff member.

Ntombikayise lives with her grandmother, who cares for seven grandchildren and two of her deceased sister’s children. Nine in all!

“Is you grandmother here?” asked one of TLC team, who quickly found her waiting in the Room 3 line to see a doctor.

Thuli Msane agreed to come to the vision department, where TLC staff learned more about her family.

A son and a daughter and both of their spouses have died of AIDS. “Others ran away when the sickness came,” she said.

Only 49 years herself, three of her nine children have died. Her husband left years ago. She grows a few vegetables to sell or buys them and resells them to make a little money for her big family.

Today, Thuli wants all grandchildren in her care to be educated. She used to carry Ntombikayise on her back, when the child was ill but still wanted to attend school.

“Have your other grandchildren been tested?” inquired TLC staff.

“Two have been tested (three counting Ntombikayise). I’m watching close to see if the others look sick,” answered Grandma Thuli.

Now to find all those children. Two older boys, the sons of her sister who had died, wanted to be circumcised, which meant they would be tested first. One boy needed additional surgery to repair a deformed penis. Both received the necessary medical help that very day. And both tested negative for HIV.

A TLC vehicle was sent to Grandma Thuli’s homestead to get two children, who had not come to school. Two others were found at the shoe truck where they were waiting to be fitted with new shoes. A TLC staff member followed all the children through the process, so they wouldn’t be scared or confused.

Meanwhile, Grandma Thuli was treated by a doctor and waited nervously for her grandchildren’s results. Thuli, too, is HIV positive.

Silence and unspoken tension reigned. Test results? All the children were negative! (Almost unbelievable, but true.)

Grandma Thuli jumped up and hugged first one TLC staff member and then another. She was ecstatic, as were all those present.

“May God enlarge your territories. May you continue and not end with my family,” she declared. “I appreciate the hearts you have. It’s my own heart.”

All the children were given new shoes and knitted hats. Truly it was a day for celebrating.

“I can sleep at night and not wonder, not keep looking at my grandchildren to see if they are sick, if they cough, if they look tired. Not anymore. Thank you.” Gratitude in a few words…

A TLC team member prayed with Thuli and her grandchildren, except the ones still in the surgical department. He told them to honor their grandmother when they were adults for all she was doing for them in their youth. “Remember her kindnesses and take care of her,” TLC staff said.

And the girl who started it all?

Ntombikayise may have come expecting nothing, but she left with “my heart full.” She’s still blind in one eye, but she sat all day and watched TLC team – as many as 12 different people – tenderly love her family one person at a time.

Blessings flowed back and forth, up and around, encircling all.