Mbongiseni – Growing a Leader from a Gardener 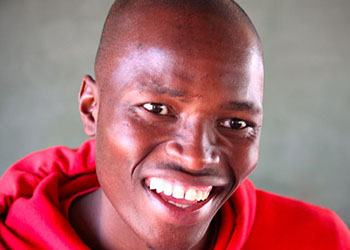 As The Luke Commission strives to develop leaders among young Emaswati who will serve their own people with compassionate health care, examples emerge. Shining stars, so to speak.

One of those is Mbongiseni whose career as a gardener has blossomed into managing TLC outreaches and overseeing more than 50 TLC employees at any one time.

“We look for someone with character knowing that the maturation process will take several years,” said Echo, managing executive director. “Then we develop more character through God’s Word and godly examples and sink all those roots deep.”

Three years ago, Mbongiseni came to the Miracle Campus in a yellow work suit to paint the Temporary Operations Building on the then newly-acquired Miracle Campus.

“It had been a cow barn, so everything had to be cleaned out first,” Mbongiseni remembered.

“I wasn’t sure who Echo was. When I started working, I was also watching some ladies. Then I noticed one was watching me.”

“But later she told me she liked what she saw,” said Mbongiseni.

For four years, Mbongiseni had been a gardener, painter, and general handyman for Frans and Martie, friends and advisers to the VanderWals.

Echo asked Frans, who also is TLC’s Eswatini board chairman, “You think Mbongiseni should stay in the garden?”

“I will never hold someone back from progressing in life,” Frans laughed. “Let me talk to Martie first. He works for her.”

When he first arrived at the Miracle Campus, “only the containers stood here.”

After the TOB paint job, Mbongiseni started on TLC’s construction team. He helped build concrete stands for the containers and then organized tools and supplies by coming early to work to get everything set up before 7 am.

“I observed and wanted to learn,” he said. Mbongiseni also translated from English to SiSwati for workers who couldn’t understand each other.

“Echo made me a team leader. Then she said I must go to outreaches,” Mbongiseni recalled.

“That was my bye-bye to the construction team on outreach days.”

Traveling rural Eswatini, much of which he had never seen before, Mbongiseni saw how TLC reaches out to those who have little and even less health care. “I just watched what others did and followed close.”

One day a TLC Liswati leader handed Mbongiseni a cell phone. “What do I have to do with a phone?” he asked. “I know nothing.”

Grinning his illustrious smile, Mbongiseni said: “She said just click here and click here. Everything you need is on the phone.”

Mbongiseni took the phone to his room and clicked, clicked. “It was difficult for me to sort, but I went from team leader to supervisor,” he said.

However, when his contract came up for renewal, Mbongiseni told Echo: “I’m trying, but feel like I am in a corner and can’t see my way.”

He continued: “I love the words she spoke to me. I will remember them always.”

“Echo said, ‘Like a tree we must each have a tap root. That’s step one. I see the integrity you have. You need to keep the phone. You will excel.’”

Still Mbongiseni was perplexed. “I told others I was not struggling with the job, but they saw I was not okay. I didn’t feel I was strong enough to make good decisions.”

TLC leaders gave Mbongiseni a day off, and he met with Brian, TLC’s discipleship pastor.

“Thank you for observing my black day,” Mbongiseni remembered now. “Shortly after, I was back in full force.”

When several staff members were terminated for dishonesty and theft, Mbongiseni was thrust into an even greater leadership role.

He was told, “You are going to lead the team at the next outreach.”

“I thought, Oh, I am? I don’t know how to deal with that,” Mbongiseni said.

Joe, assets manager, accompanied Mbongiseni that day as a cheerleader and technical adviser. “ I took my first picture on my phone that day,” he said, “and everything went smooth.”

Just a few outreaches later, Mbongiseni started training another Liswati staff member to be a manager and I thought, “Now I get to lead another leader.”

Mbongiseni’s father was killed in a South Africa gold mine before he was born. His mother was very young and the second wife of his father. She left Mbongiseni with an aunt when she married another.

His father’s insurance from the mining accident paid for Mbongiseni’s schooling and basic needs, but he always felt like he did not know either his mother or his father.

“I was crying ‘Who is my dad?’ Then God touched me and He said He was my father,” he explained.

Mbongiseni has been “tested” during his time at TLC. An employee stole a pair of boots and was released. Similar boots were found in Mbongiseni’s room.

“I had used them during a construction project and had forgotten to return them.”

Mbongiseni was sent home while the matter was investigated. “I prayed and knew if I was honest in the smallest things, God would provide for me in the big things.”

After a couple of tense days, Mbongiseni was called back to work and cleared of all wrongdoing. “I’m still at the top of the roof after going through the fire. If I hadn’t gone through that maybe I would run now when things get tough.”

When he was a boy, Mbongiseni wanted to be a soldier or a policeman or a teacher. Those are good jobs in Eswatini with decent, regular wages.

“But I have thrown those wishes in the river. I am in heaven now. I love working with The Luke Commission.”

Recognizing that a leader must stay personally sharp spiritually, Mbongiseni said: “If I have a grudge, I must shut it out. I want my heart to stay clean.”

He participates in all TLC’s discipleship seminars and Bible studies, as well as attending Potter’s Wheel Church.

Yes, from the garden of flowers and trees and grasses to the garden of Emaswati boys and girls, men and women – that’s Mbongiseni’s orchard. And it has just begun to bloom.