One, Two, Three, Four Prayers Answered in One 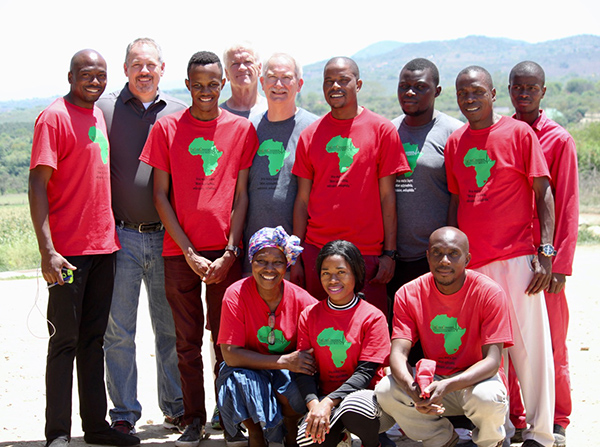 Often when God answers a long-standing, long-pleading prayer, we discover He is responding to others’ prayers, too.

Just ask Missi Schmelzenbach. And then prepare to shed a few tears with her. Some tears are just meant to be.

“My prayer was very selfish,” Missi said. “I was in pain and just wanted the pain to go away. But my selfish prayer was answered in a huge way.”

When God moved, He wrapped His answer around Missi, two boys, a young woman, and a renowned doctor.

Backtrack in time a minute: Dr. Harry and Echo VanderWal had been trying to obtain very expensive medicine to treat Missi’s RA for more than a year. Missi took medications that worked somewhat but she often needed steroid injections into her joints just to go on.

“Going on” for Missi is serving full-time with The Luke Commission Compassion Medicine and often teaching Sunday school or singing with the church music team on Sundays. She and her husband, Pastor Brian, are in their 5th year with TLC in Eswatini.

Brian explained that three years ago he was convicted that although he and Missi were willing to dedicate their good things to God, such as their children and possessions and ministry, they had not dedicated their struggles to Him.

“I wondered why. We saw a need to do just that,” said Brian. He and Missi went forward at Potter’s Wheel Church one Sunday and told Jesus: “My desire is that this RA be gone from Missi’s body. As long as she has it, though, we want to dedicate her rheumatoid arthritis to You.”

How did this decision affect the Schmelzenbachs? “That dedication was to honor God in the small things and in the difficult things. Missi did not complain and no one knew when she was struggling. We simply dedicated it all to Him.”

Now backtrack 8,000 miles: A few months ago, Harry and Echo spoke at a dinner in Oklahoma City to seasoned supporters as well as a few learning about TLC. For the first time, they met Dr. Robert McArthur, a rheumatologist with extensive expertise in rheumatoid arthritis.

Dr. McArthur told the VanderWals he would obtain the desired medications for Missi.

Not only that, he offered to come to Eswatini six weeks later to evaluate how Missi was doing on the new meds. Dr. McArthur told Missi later, “That night I willingly obeyed a whisper. It surprised even me.

When Dr. McArthur arrived in Eswatini with his pastor friend Brent Hardesty for just a two-day visit, he had little inkling that his life and the lives of four others would be changed. But they were. They still are.

The two boys, ages 11 and 14, had juvenile rheumatoid arthritis. They could barely walk and were in pain. Their mothers thought nothing could be done for them. Of 100 kinds of arthritis, theirs was the most debilitating.

A 20-year-old mother spent her days in bed because she had rheumatoid arthritis.

TLC keeps records of patients who need additional assistance. Therefore, these three patients were called to come to the Miracle Campus the day Dr. McArthur arrived.

The young woman was carried into TLC warehouse, which also serves as the Miracle Campus medical center. X-rays showed erosion in her knees and permanent damage. RA had taken over her life two years ago. Only recently had she come to a Luke Commission outreach and been given ibuprofen.

“With such compassion, he got on the floor and touched their feet and knees,” said Missi. “I’ve had access to awesome drugs, but they had not.”

Dr. McArthur prescribed medications for all three and administered injections into the young mother’s knees.

“When would we ever have a rheumatologist come for just a few patients – one who would sit on the floor,” Missi wondered.

Pastor Brian thought the doctor had tears in his eyes, too. “Either that or the wind and dust in the air made his eyes water…”

Before they left, the boys’ mothers expressed joy that now their sons could run like other boys. The young mother walked out of the warehouse without assistance. The pain etched in her face turned to smiles – and, yes, tears.

When Dr. McArthur saw The Luke Commission in action on several medical levels, he said, “This relationship us just beginning.” He promised to return to Eswatini in the future. In the meantime, he agreed to be a consultant.

Today, Missi expresses “overwhelming gratitude to the tenacity of my directors who worked for years to chase down a solution for me.”

Noted Echo, “We can say to these patients that everything that could be done has been done.”

To which Pastor Brian added: “God chooses what and who He chooses to use. In this process, we have seen many miracles. I am still learning, still a student, still choosing Him.”

by Janet Tuinstra, who loves writing for The Luke Commission, yes sometimes with tears