Glimmer of Hope from Eyes That Grew Dimmer 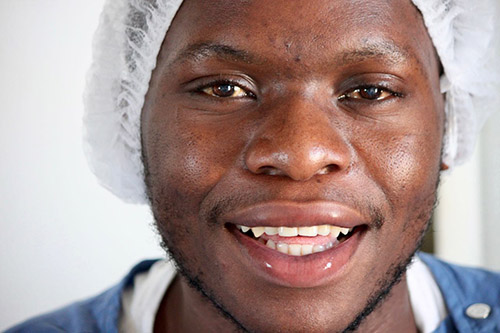 He could see when he was a boy. Then his eyesight grew dimmer and dimmer. Why? No one could tell him. Then hope returned when The Luke Commission agreed to treat him. Eyeglasses might help. They didn’t. Contacts might be the answer to better sight. Not.

The Luke Commission’s journey with Nhlakanipho Mncube continued. He was given many vision tests. “We are not giving up. Don’t you, please,” TLC staff repeatedly told him.

Months and a couple years pass. Sight is now reduced to close up shapes only. Nhlakanipho cannot see to sign his name, though he gets within an inch of he paper. Neither eye functions.

“I learned when I could see to look at people. Now I still do, but I cannot see any expressions or people’s faces,” he said. “Sometimes I don’t even see an outline, only hear a voice.”

Now 20 years old, Nhlakanipho was in high school, age 16, when his vision started to be blurry. He finished high school but did not do well in form 5, his least year. “I remember seeing well in primary school, but it’s just a memory now.”

Living with his mother, Nhlakanipho added, “I’m alone.” His father is still alive. “Sometimes he calls me and asks what’s going on in my life.”

Nhlakanipho learned about The Luke Commission when listening to the radio in 2015. He went to the Miracle Campus gate and pleaded to be treated, even though he had never been to a TLC rural outreach. (At that time, all patients were initiated at the outreaches.)

“They listened to me, and took me in,” he recalled. “That’s why it’s called a miracle center.”

Unexpectedly, but expectantly, a cornea became available in late October, 2017 – and a doctor to operate and TLC team to coordinate and care for him. The cornea was brought to Eswatini from the Iowa Lions Eye Bank in the U.S.

Two months earlier, a TLC staff member had asked Nklakanipho if he would like a transplant, if a cornea became available. “I said definitely. I would love it. They warned me that healing would take a long time.”

However, the young man admitted: “Honestly, I had given up, that I would ever see again. When they called me Friday and asked me to come on Saturday, I did not know why. The Luke Commission called me often to ask how I was doing. Usually, I told them ‘not so good.’”

Before surgery, Nhlakanipho was tearful, when he considered that someone else had to die for him to get a new eye. Though he was anxious, he said he could not wait for his turn in surgery. “Today I have hope again,” he said.

The surgery went well, though it was at the end of a long day for the TLC eye team. Lightheartedly as he had been ever since returning to Eswatini for a week of surgeries, Dr. Matt noted: “This will be a piece of cake after some of the difficult cataracts surgeries we’ve had today. I’m so glad to be able to do this.”

Wednesday morning, Nhlakanipho exclaimed: “I can see a bit. I’m positive this will change my life. I can only imagine. I had a little pain yesterday. Many tears fall down my face as I think of this wonderful gift.

“I used to think I wanted to be an IT man. But now that I have known The Luke Commission, I want to do something to help people. I could become a paramedic. Maybe I can even play volleyball with my friends now…”

Maybe. Time and continued treatment will tell. But Nhlakanipho has a glimmer of hope. And The Luke Commission team rejoices and anticipates…

PS  Nhlakanipho has recently been hired by TLC. He is a very bright young man that has been severely disadvantaged by not being able to see. But his sight is improving!  It is a joy to watch his recovery and major life enhancement up close and personal. Today he works on The Miracle Campus and at outreaches with a shy smile that suggests he still cannot believe his good fortune.