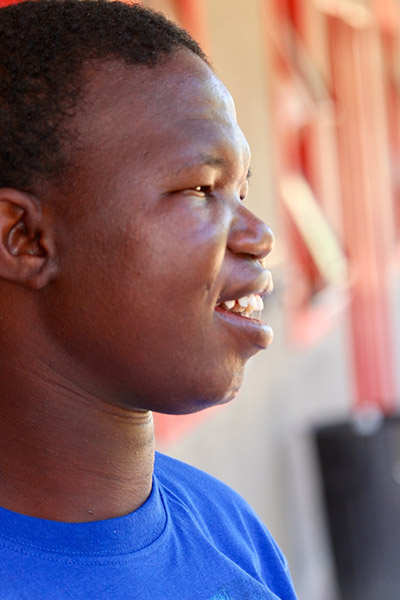 His father traveled several hours from South Africa to see his son—to see for himself that his son was no longer chained to a log, living outside like an animal.

“I’m so happy Richard is off the chain,” said Geraldo Manjate. “When I saw him four months ago, his grandmother’s family told me he could not be controlled if he was free.”

Richard was chained to a huge log for three years.

“The Luke Commission has given Richard freedom,” exclaimed his father.

Now living on the Miracle Campus, Richard receives medical attention and tender, compassionate care from many staff members. TLC administrators negotiated gently with Richard’s family to allow the heavy chain to be cut from Richard’s ankle, since the key for the padlock had long been lost.

“He does not want to go back to his old home. He is eating well and getting new clothes,” said Geraldo, hesitating, “and so much more.”

This story of seeking and receiving forgiveness runs through many people, many failures, many fears, and many days and nights. Eventually the dawn breaks!

Geraldo is from Mozambique but has spent most of his adult life in South Africa, where since 1988 he has been a supervisor of dispatch on a large farm.

During a short stay in Eswatini, Geraldo’s girlfriend became pregnant and bore Richard. “She died a long time ago,” explained Geraldo.

He has another family in South Africa, with children ages 23, 18, and 14. “But I have never forgotten my boy here.”

His grandmother and various uncles reared Richard. At age 15, “he became confused and talked about strange things,” his father remembered.

“He was hanging around kids who smoked and took drugs,” Geraldo said. “He might have been devil worshipping, too.”

According to his father, one day Richard announced, “I’m going to destroy your car.” Geraldo took Richard with him to visit family in Mozambique. On the way home, they had an accident that totally demolished his car.

Geraldo bought another car. Three weeks later, he was involved in another auto accident. “He was with Satan worshippers then,” said Geraldo.

Richard acknowledged he was. “They told me to kill my dad. I said ‘no.’”

Fearing for their own safety, family members chained Richard to a huge log, so he could not run away or hurt anyone.

The so-called friends did not come to see Richard when he was on the chain. “But when I was sleeping, I could see them calling to me, saying ‘let’s go,’” said Richard.

“I have found out at The Luke Commission that Jesus is more powerful than the evil spirits,” said the young man. “God did protect my father from the car accidents. I know, because my father is still alive today.”

Sometimes, though, Richard still dreams, “I’m in the river with the fishes, and the spirits are calling me. It pains me that they are still calling me. I wake up, and I’m tired.”

To help Richard with his nightmares, TLC staff members sleep in the same room. During the day, Richard participates on the assets team working in construction and on the warehouse team stocking and restocking. “I feel stronger,” he smiled.

Geraldo admitted: “Richard’s sickness in the mind overwhelmed me. I went to a traditional healer. I must be honest. I was confused.”

Continuing with tears in his eyes, Geraldo said, “Now I know it is Jesus who has helped my son, not a traditional healer. I will come see him more often on this campus of miracles.”

Geraldo asked forgiveness from his son for not interceding for him with more determination and more frequent contact. Richard just smiled, nodded his head, and grasped his father’s arm.

Richard asked forgiveness for wanting his dad to be injured and calling down curses on him.

These days, Richard works and lives on the Miracle Campus, as he slowly learns English and attends Potter’s Wheel Church every Sunday with the team.  Geraldo stayed on campus overnight and accompanied his son to church the next morning.

“I like singing and praying,” Richard said. “I understand some English but do not know how to respond.”

PS For more about Richard’s amazing release and new life, watch for TLC’s video about Richard and Jabulani, another story of deliverance.