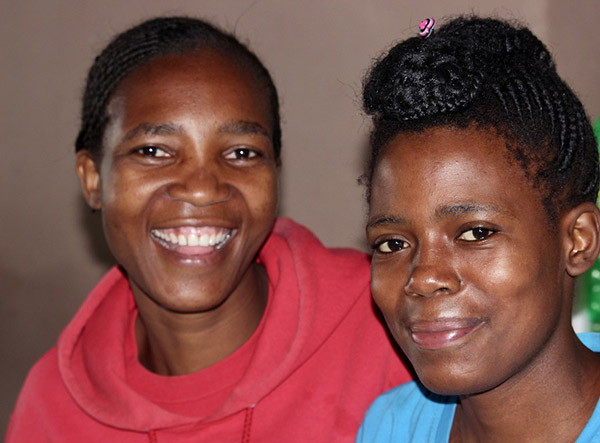 Young people in Eswatini try to take their own lives for a variety of reasons. Yet most simply feel alone and unloved–the results of losing their parents and loved ones at tender ages.

Orphan hearts become manageable and understandable when they realize Jesus will adopt them into His family, simply for the asking.

That’s what happened to Lindokuhle Matibuko this week. Attractive and soft-spoken, the 22-year-old lady raised her little brother from the time she was six years, and he was two.

Lindokuhle’s father died in 1998 and her mother in 2002. She does not remember either of them, except from a few photos she holds dear.

She lives with her grandmother, who is “very sick, so please do not tell her what I did.”

Lindokuhle became angry with her boyfriend. “He beat me and locked me in his house, taking the key with him,” she explained.

What was the argument about, we asked. “He found a number in my phone that he did not like. It was someone he thought was interested in me.”

The couple do not live together but have known each other for six years. They have a three-year-old daughter, who the man helps support. However, he has not asked Lindokuhle to marry him, she said. “I have always felt like the orphan I am.”

In an act she now regrets, Lindokuhle grabbed a bottle of Methylated Spirits (similar to Isopropyl alcohol), used in the medical field for wound care and also used in Emaswati households for general cleaning.

She drank a cupful. “I was dizzy and scared and started vomiting,” she remembered.

At this opportune time, her boyfriend’s roommate came home and found Lindokuhle. He called the number he had seen on a green Luke Commission pharmacy bag given to patients to hold their medications. It’s the 24-hour hotline at +268 7613-8814.

The Luke Commission immediately sent out its ambulance car to pick up Lindokuhle. In emergency mode, TLC medical staff admitted the young woman to the Miracle Campus intermediary hospital (TOB) and began treating the poison in her body.

“I really did not know what was going on until I woke up,” said Lindokuhle.

That evening a TLC counselor explained to Lindokuhle that her life had been spared, that God had sent someone to find her at just the right time, that the medical team was fighting the poison in her system, and that her life was precious to Jesus.

She listened and asked questions and then stepped into a relationship with Jesus Christ. “I really did not want to die,” she said a couple of days later.

The medical staff kept Lindokuhle on the Miracle Campus to watch for symptoms of damage to parts of her body still absorbing the methylated spirits.

“I’d like to say thank you for saving my life. More than thank you,” Lindokuhle said.

When a counselor explained that life was a gift from God, “I realized God must love me.”

Lindokuhle said she has no family, except her elderly grandmother, and no girlfriends. “I did not have time to have friends, because I had to take care of my brother.

Her younger brother is 18 and attends high school.

Just a couple of months ago, Lindokuhle graduated from high school, which is a celebrated accomplishment in Eswatini.

She would have preferred to have another woman bring her clothes to the hospital, Lindokuhle said. However, since she has no other close friends, her boyfriend brought her a change of attire. “He said he was sorry,” she admitted.

Lindokuhle was asked, “What would you tell other young women who have trouble with their boyfriends and think they should try to kill themselves?”

“Move on with their lives,” she answered. “It’s not easy but they must try.”

A TLC counselor added: “Jesus will give you the power to be strong and to know it’s not over until He says so.”

A nod of her head, a half smile, and the clasp of her hand suggested that lasting lessons had been learned from Lindokuhle’s suicide attempt. She may still be lonely, but she is not alone.