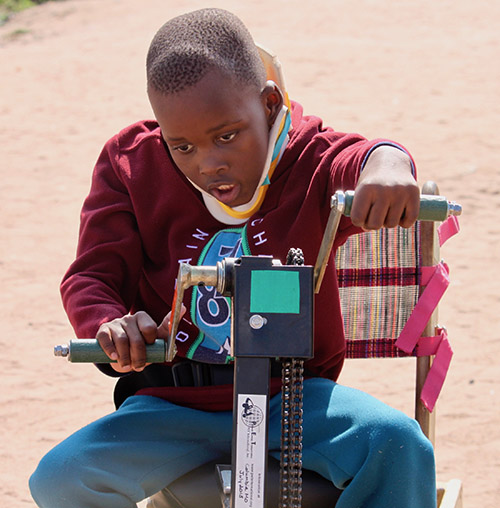 His disabilities were extensive but so were his and his mother’s desires for education and learning. Hence, Siwakhile needed two mobility carts – one for home and one for school.

Last year, 8-year-old Siwakhile received a Mobility Worldwide cart at a rural mobile outreach, when The Luke Commission came to the school where his mother teaches 2ndgrade.

Although he has braces on his feet, his feet in stiff boots, plus a brace on his neck, Siwakhile had learned how to move quickly in the cart. His energy and joy when “driving” draws other children into his presence.

“He is fast and happy on the mobility cart,” said his mother Sithembile. “It has strengthened his arms and built muscles in his upper body that he did not have before the cart came into his life.”

Sithembile continued: “I would like a second one so he could get around at school.” (Liswati schools are often built on the sides of mountains or hills, where the ground is uneven and on several levels.)

Siwakhile was still in preschool at the time of his fitting for a second cart, but his mom hoped he would be in first grade the following school year.

Currently, his mom leaves her school at 1 pm when her boy is released from preschool, “so we both get home at 1:30 together.”

Siwakhile does not walk, does not talk –“yet,” his mother said. “But he tells me when he wants to eat or when he needs to go to the toilet. Now he wants to wash dishes in the tub outside.”

The Luke Commission partners with Mobility Worldwide to give carts to adults and children with strong arms but weak or non-functioning legs. The cart is made by Christians throughout the United States and sent to countries all over the world, including Eswatini. The Luke Commission has worked with Mobility Worldwide, previously know as PET Personal Energy Transportation, for 10 years.

Siwakhile did not stop exclaiming about the mobility carts. “It has made him stronger. He smiles and laughs when he can go back and forth and twirl around in his cart,” she said. “He takes other children for rides. He’s so clever when we go shopping. He is clever in other ways, too. He can learn much in school, I know.”

The Luke Commission granted Sithembile her request for a second cart, knowing it could stay in one area at the school and not have to be carried up and down the sloping, rugged terrain.

Siwakhile was born premature after six months. “The doctors said he was stuck when he came out feet first,” explained Sithembile of her only child. She was married, but her husband died three years ago.

The boy’s mother added with a sad smile on her face: “He does not want to be disturbed when he’s watching the funeral.”

To Mobility Worldwide, Sithembile noted: “They are doing an excellent job helping my son. He can even go to our neighbor’s home and be with his friends.”