“I could not speak one word of English, but we all lived in the same house.”

Meet Lucky Ntshakala, who has a story to tell about the VanderWal family and the then-small Luke Commission team, that is different from any other story we have previously shared.

Way back in 2006, Harry and Echo met Lucky at a rural outreach. We who were there remember in our minds what we saw when we first became acquainted with Lucky.

Echo gently removed soiled cloths that covered burns all over Lucky’s body. His mother stood quietly watching her son grimace from pain. He did not utter a sound.

Lucky’s arm was severely infected. His family lived far from a city and could not afford public transportation to get back and forth to a hospital. Consequently, he had no bandages, ointment or antibiotics. His mother had to reuse the same cloths over and over. 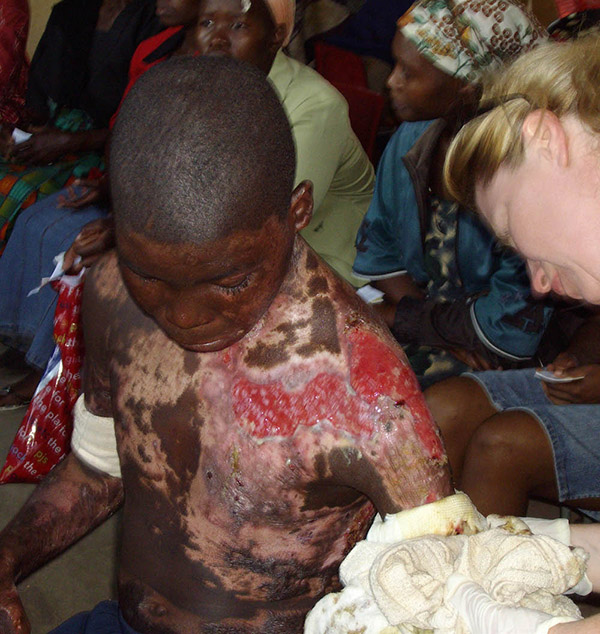 Thus began a four-year odyssey that reached across cultures and surgeries and daily care.

Just last week, Lucky returned. This time he brought his mother for medical treatment at the Miracle Campus.

“I am so glad to find you,” he smiled. “I thought you had left the country. You taught me my first words in English. I would like to be able to learn more.”

Looking back to celebrate today is Dr. Harry, who remembers: 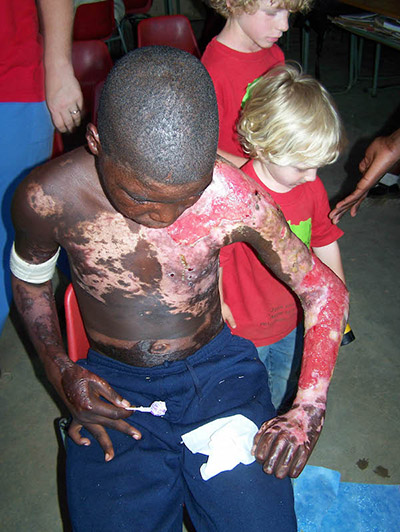 In 2006, VanderWal children sympathize with the teenage boy who will become their friend.

“Lucky’s burns were so severe when we first knew him. He developed a severe contracture in his arm, which constricted his elbow so that he could not extend his arm. When someone is injured as badly as Lucky was, the tissues under the skin are burned, too, and will no longer stretch as they should.  This causes the joint to have limited motion.”

While on campus recently, Lucky reconnected with the family who adopted him for several months. His joy was apparent. His thankfulness was obvious.

Now 28 years old, Lucky met the VanderWal family almost 14 years ago. He recalled how he lived with the family in Manzini for eight months. That was the longest single stretch of time, although Lucky came and went in 2008 and 2009 as serial skin grafts progressed.

The VanderWal triplets, now 18 years old, were little boys then. However, Lucky said: “They treated me like brothers. They told me I was their older brother.” 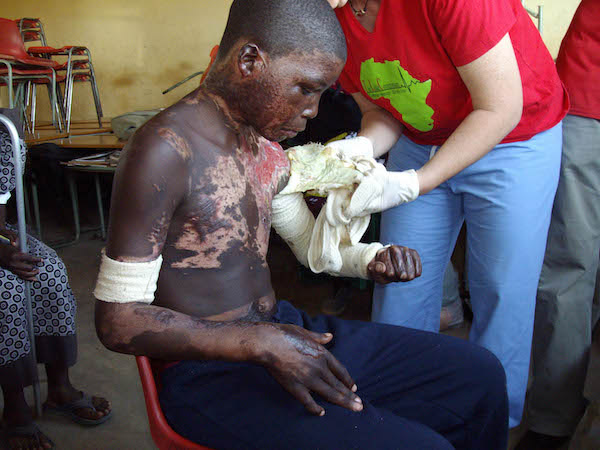 “I will do my best not to add pain,” says Echo through a staff translator. In the days to come, Lucky would learn to understand Echo’s English words.

Lucky stayed with the VanderWals in their home, which was also the center of operations for The Luke Commission back then. The pharmacy was in the house. The kitchen for all staff meals was there. Dinner tables were often converted to pill-counting tables. Medical supplies were stored in a nearby container.

Before, during, and after surgeries at nearby Raleigh Fitkin Memorial Hospital, Harry and Echo tended Lucky’s arms and shoulders and hands and chest and face, treating infections and other complications. The infections had to heal completely before Lucky received skin grafts.

“Though I was often in pain,” Lucky recollected, “my new family was always happy, so that made me happy.”

Lucky attended every outreach with the small TLC team. “Back then, they said ‘no one stays home.’” 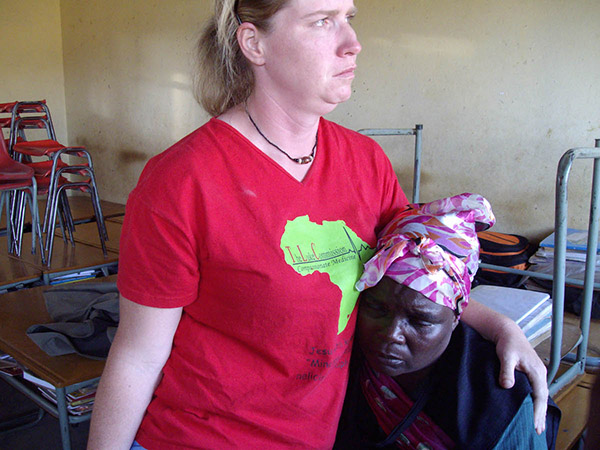 Echo consoles Lucky’s mother on the day they first met. Echo herself holds back tears.

“We did not have anyone to care for him, so Lucky did always come with us,” agreed Echo.

“I saw so many different places in my country that I had never seen,” added Lucky.

The four surgeries addressed his left arm and hand. He had skin grafts from the skin taken from his right leg. “It was so painful that I almost gave up,” noted Lucky, rubbing his right leg.

His chest, shoulders, other arm and hand also were burned, took a long time to heal, and left scars. 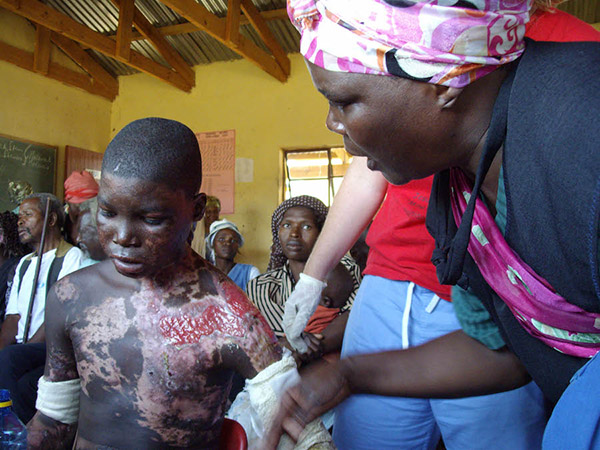 How did all this happen? His family had overnight visitors, so Lucky went to sleep in a spare room where there was a petrol bottle. A small boy came into the hut and lit a candle, which accidentally sparked the bottle. It exploded.

Lucky was fast sleep. When he awoke, his body was burning and he could not get out. One of his brothers crawled into the room and pulled him away from the explosion.

The burns were still infected, raw and oozing when Lucky’s mother brought him years ago to The Luke Commission outreach in their rural community. Even the scar tissue that had formed made it impossible for him to stretch out his left arm. He carried it at an angle next to his chest.

“I will never forget that day,” said Lucky. “The doctors (Harry and Echo) told me I had to go to Manzini. I was very angry, so scared. I was afraid to leave my mother behind, because my mom was in my heart.” 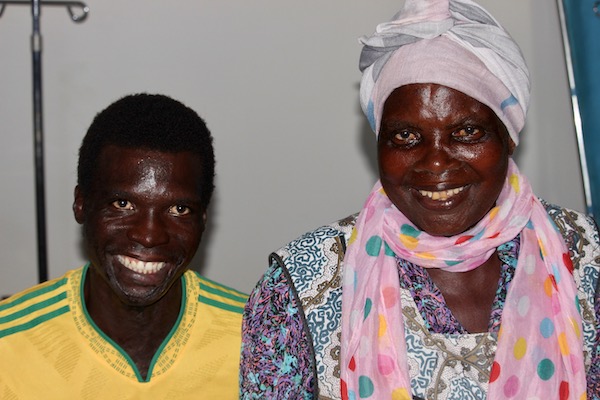 This is Lucky and his mother today.

He continued: “I thought ‘No, no. These people are not my relatives. I cannot leave my mother alone.’”

Years later, Lucky is so grateful for the VanderWals’ insistence that he could get help but needed them to intercede for him. And that meant living with them.

“I think God said, ‘No, I refuse to let his be. This one will live.’” That from a young teenager who was in so much pain that he could barely move.

Then, with an outstretched left arm and hand, Lucky declared, “I’ve been healed. I am a man with power. It was Jesus who healed me.” 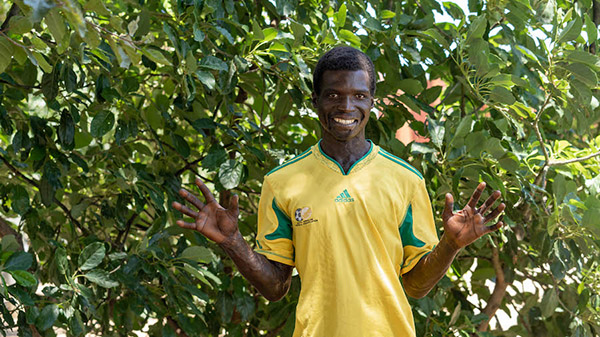 Here’s Lucky today with full use of his hands and arms.

So excited that he could hardly contain his smile or his amazement, Lucky explained how he “found” The Luke Commission and the VanderWals after all these years.

One of his sisters works at a nearby grocery store in Sidvokodvo.  When his mother became ill, Lucky’s sister suggested he take their mother to “the big place on the other side of the road called The Luke Commission.”

Wonder of wonders, Lucky rejoiced: “I thought there could be no other place with the word ‘Luke’ as part of its name. It must be them! When I went to find them in Manzini long time ago, they were not there. I was sad.”

Lucky continued: “I am glad everyone is still alive. I was surprised you are all still here.” 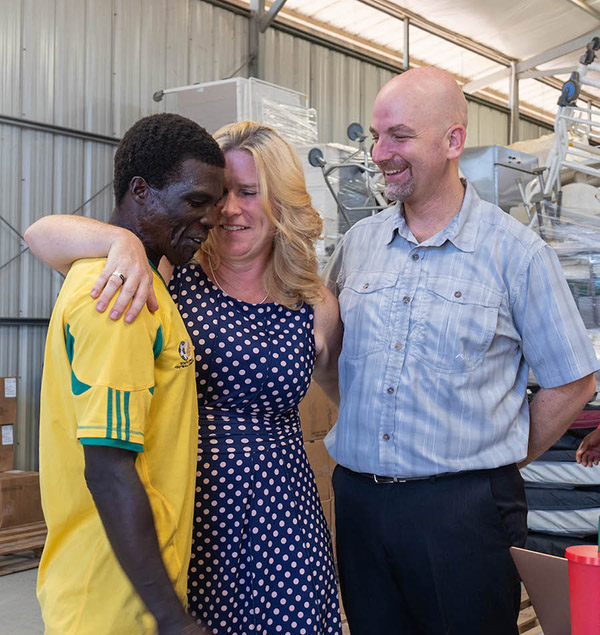 When Lucky was reunited with Echo and Harry recently, the years, but not the gratitude, melted away.

While his mother was being treated for a routine illness by TLC doctors, Lucky put in his application for a job.

“Look at all these buildings and all these people in red, moving around and helping everyone. Those fields that are being planted look wonderful. I see you are implementing many new strategies, ”he said.

Lucky quit school after the 9th grade because his dad became ill. “There was no money for high school, and I had to help my family.”

Later, Lucky said he started trade school to become an electrician, although he “did not have the money to get a certificate. I’m trained, but most of the time I use my brain to think.” 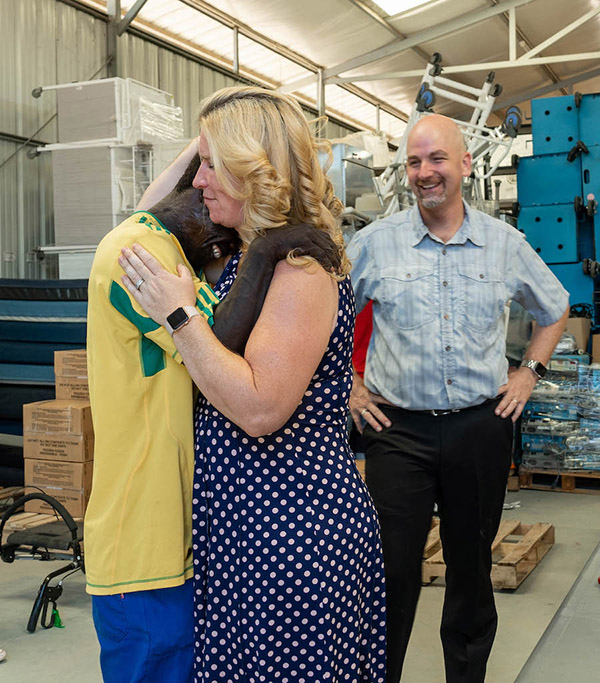 He is proud to have earned a driver’s license. “I can even change gears with my left hand when I drive.”

Circling back to his gratitude, Lucky declared: “Thank you all for what you have done for me. When Harry and Echo found me, I had lost hope. I thought I would be like that forever. Then the Lord provided The Luke Commission. Now I am a son of TLC.”

Lucky remembered Zion (now 15 years old) as a small boy. He remembered playing with Jake, Luke, and Zeb, even one-handed and one-armed.

“Today I saw Luke (now 18 years), and he is too tall. Last time he was a boy. I wonder if I could play soccer with the boys now.” 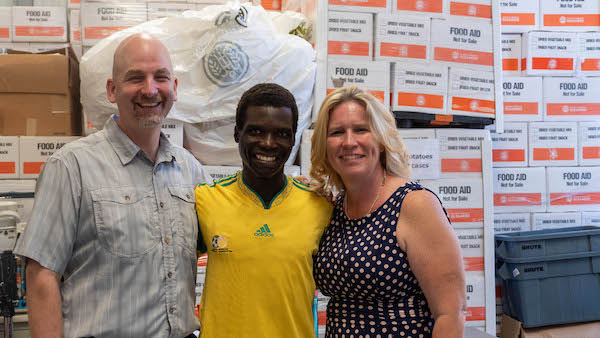 Lucky’s father died in 2018. Now he cares for his mother. He has two brothers and three sisters. He also has a girlfriend and wants to marry. “She is the only one for me,” he said.

Lucky is currently employed part-time in the electrical business. “Now I can do everything with this arm,” he said, flexing his fingers and pumping his arm.