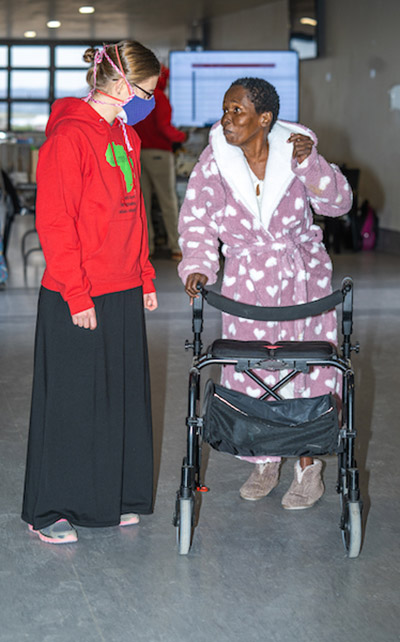 She came as a university volunteer, returned alone as a volunteer, and then remained through the COVID-19 travel ban—all with a smile and a serene sense of service.

“What a privilege it has been to be part of this team,” said Meredith Merritt. “I’ve never seen teams like TLC, where people really work together, communicating and respecting each other.”

Meredith came to Eswatini for three months to complete her graduate studies in occupational therapy. In April she could not leave for home, as planned, because the coronavirus lockdown extended through South Africa where she was scheduled to board a flight. Was she disappointed?

“When I could not get out, I was excited to be able to keep working with the team,” she mused. “I didn’t feel ready to leave anyway.”

Meredith first came to Eswatini in 2016 with a group of volunteers from Cedarville University, where she was graduated in 2017 with a degree in allied health. She furthered her education in an occupational therapy graduate program at Ohio State University. She earned her doctorate degree this spring while still in Eswatini.

Meredith listens to a longtime patient in TLC’s hospital ward. Listening is an art Meredith has perfected with her extended stay in Eswatini.

What has she learned from the team, from her Emaswati counterparts? Just what makes TLC so special?

With no hesitation, she answered: “It’s awesome to see their commitment to serving God. I watch such tenderness with the care of each person. It’s not human. God is at work placing love in their hearts for the patients.”

She continued: “I have learned to have a community mindset. Even in greetings, it’s not about you or them but everyone together.”

And that’s not all. “I see patients caring for each other, or one caregiver helping a patient who’s not her responsibility. They don’t even seem to think about it. They just do it.” 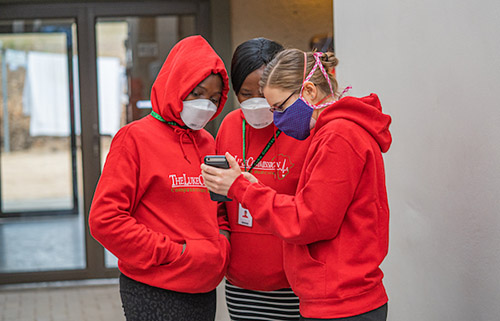 Teaching staff various occupational therapy techniques is one of Meredith’s talents. The Joshua principle—always training someone what you already know and do—is alive and well on the Miracle Campus.

After more than five months, what does Meredith do in a typical day?

This day she met with five TLC staff to train them in therapeutic exercises and stretching exercises for patients.

Following this training, she spent more of her day in TLC’s hospital “doing specific things with specific patients and helping the wound care team.”

In fact, TLC staff members will tell you that Meredith gladly does whatever is asked of her, quietly helping and encouraging patients. 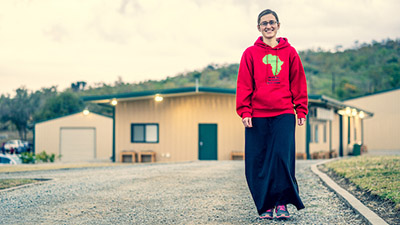 Meredith came alone to volunteer at The Luke Commission. She enjoys being a member of the team. Here she walks from one assignment on campus to another.

One example is a 15-year-old girl, who has been a hospital patient for seven months. She came in paralyzed from her waist down, admitted with pressure sores.

“She could not use her legs or straighten them without crying out in pain, but the rehab team has taught her how to stretch her legs so she can transfer herself to a wheelchair,” Meredith said. “It has been incredible to watch her regain some independence and dignity. I’ve grown to love her, although she does not speak English. I can’t talk to her, but we work together.”

Meredith’s community in the United States is Saegertown, Pennsylvania. At age 25, she has an older brother and three older step-siblings. When she told her family about her plans to travel alone to Eswatini, her mother wanted her brother to make the journey with her. In the end, Meredith traveled alone.

“My mom knew I’d be well taken care of, once I got here,” she laughed. During coronavirus, she touches base with her parents regularly via internet. 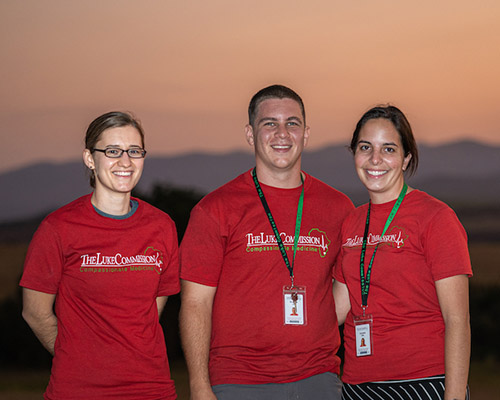 Meredith (left) did not know Brandon and Danielle Little from Pennsylvania, her home state in America, until the three met in Eswatini.

Usually, visitors to The Luke Commission come in groups or families. However, Meredith came alone. “I had peace from the Lord that this was what I should do.”

Her walk with Jesus began when she grew up going to church camps in the summer. Her relationship with Christ blossomed in high school.

Her hometown in the eastern United States is only one hour away from the hometowns of a young couple, Brandon and Danielle Little, who are serving with The Luke Commission for three years. They have become good friends with Meredith.

Not only did the three grow up the same area, but also when they moved to Ohio for advanced education, they lived in the same cities. Still, Meredith, Brandon, and Danielle did not know each other until they came to Eswatini.

Thinking about her future, Meredith said simply: “My heart would be happy to come back here.”
(Janet Tuinstra)