The Luke Commission Hits the Road – Once Again

“No more pushing the trailers up the mountains!” exclaimed Big Sipho.

The “no mores” were replaced by shouts of joy and thankfulness as Harry and Echo drove the new Luke Commission vehicles onto the mission site last week – one on Tuesday and the other on Saturday, less than 36 hours before the big, faraway Monday clinic.

Never too late, that’s our Jesus, but often His timing seems a testing of our faith. Such it was with the new vehicles, which will carry TLC personnel and medical supplies to the outermost corners of Eswatini.

First the funds had to be raised in North America, $100,000 in less than two months. Echo admits that while flying over the Atlantic Ocean in mid January, she questioned Harry’s and her decision to return to Eswatini without enough money to replace vehicles crucial to the roving mobile clinics.

“I wrestled on that trip,” Echo said. “It seemed like Satan was sitting on my shoulder laughing and taunting. By the time we landed, though, I knew we had much to do to serve the Emaswati medically and spiritually, even if we couldn’t get to clinics. But the thought of hearing the communities cry for help and not being able to respond saddened me.”

Nonetheless, donors were responding sacrificially. Churches and individuals in Canada and the US were digging deep to provide vehicle funds. A challenge went out from a donor who said he would match $20,000 if others contributed. 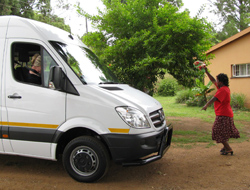 Pumi dances for joy as Harry and Echo drive home with the new TLC bus truck. 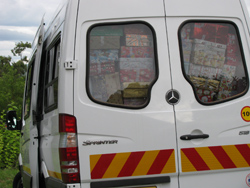 The Sprinter’s maiden votage to a TLC clinic included the back filled with Operation Christmas Child boxes.

And contribute they did! Just like the story of the Goldilocks and the three bears, some checks were papa checks, some were mama checks, and some were baby checks. Each was welcomed and appreciated. All $20,000 was matched.

Now the VanderWals could start shopping. They did, only to be confronted with more obstacles. “It’s not like the United States where you can walk into any car lot and buy a vehicle on the spot,” said Harry.

One vehicle was ordered from South Africa. Production was slowed, because of the World Cup games being played there this summer. Once the Toyota Fortuner arrived at the dealer, three police clearances had to be obtained, one in South Africa, one at the Liswati border and one in Mbabane.

All such red tape in Africa can stretch into days and weeks, but a young Liswati, Magugu, diligently called and visited the authorities multiple times. His patience and God’s goodness prevailed.

With a heavy-duty 3.0 turbo-diesel engine, the Fortuner will pull the larger trailer up and down hill and dale.

Meanwhile, the VanderWals negotiated for the 2nd vehicle. Again, they learned, the World Cup would hold up delivery for three or four months.

As usual, God stood in the wings with a better plan. A fellow member of Potter’s Wheel Church is the director of the Mercedes Benz dealership in Eswatini. He offered The Luke Commission a Sprinter 23-passenger bus at his cost. Ordered from the factory, the 2nd diesel-turbo vehicle arrived just in the nick of time for the second clinic.

The VanderWals, the TLC Liswati team, and all the short-termers who have ridden to the mobile clinics in the last five years thank the vehicle donors. Thank you, thank you! The vehicles and trailers will still be packed, but now people who have their own seats – no more lap and floor sitting. 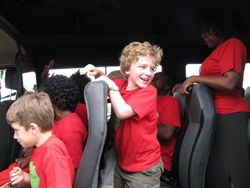 Jacob, Luke, and Gugu try out every seat. 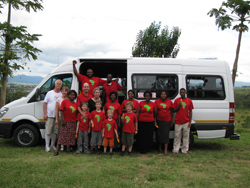 Thank you to all the US and Canadian donors. Jabula, jabula – happy, happy!

“The new vehicles are life-changing for The Luke Commission,” Harry told visiting US pastors.

A third vehicle remains to be purchased to pull the third trailer. “I have no doubts that it will happen,” laughed Echo.

Police Commander David Ngcampalala inspected the new vehicles and gestured up to heaven, saying: “God is thanking you for the work you do in Eswatini. These are not only a present for you; they are a present to the Kingdom of Eswatini!”

Director of Advancement Mark Kordic noted, “We took some seed money from the general fund to start the vehicle campaign. We are now working to replace those funds, so that medicines can be bought.”

Stories of lives touched are surfacing already. Last Wednesday a middle-aged man hobbled into the TLC mobile health care center on uneven crutches made of steel poles. One of his legs had been amputated at the knee three years ago from untreated diabetes.

He waited all day. Echo told him he would receive a wheelchair in the evening, once it was built. Kalvin, Zeb, and Zion assembled the Personal Energy Transportation wheelchair.

When presented with his gift from people who love Jesus on the other side of the world, the handicapped man threw up his arms and shouted in SiSwati:

“Now I am a destitute somebody. Before I was a nobody.” 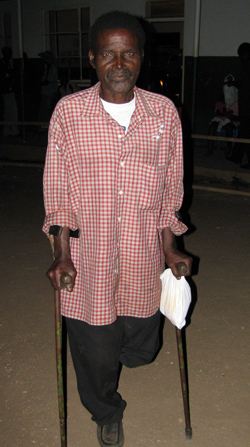 This amputee has no job, no way to get from
one place to another.

one place to another. 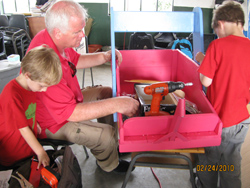 Kalvin and grandsons Zion and Zeb build a wheelchair at clinic site. 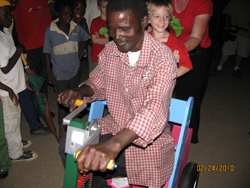 Life changes with a PET wheelchair. Now, he says, he will sell cabbages and tomatoes.

Life changes with a PET wheelchair. Now, he says,

he will sell cabbages and tomatoes.

At another TLC clinic, an 18-year-old girl gently led her 15-year-old sister doubled over in pain into the HIV department.

“She needs to be tested,” the older sister said. At first TLC staff member hesitated, because Liswati law requires a guardian to sign for anyone under 18 being tested for HIV.

“No one else can give permission,” insisted the older sister, who admitted she herself was HIV positive. “We have lost both our parents. My sister lives with her boyfriend, two men, and two women in one room, because she has no home and no food.”

“The girl cried when we told her she was HIV positive,” said Dumie, who was counseling the girls. “Usually I do not cry, but I did that day. She was so young and didn’t have any adults in her life.” 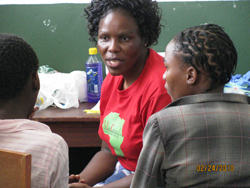 Dumie counsels a 15-year-old girl and her sister, both HIV positive. 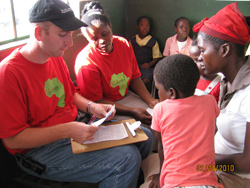 Harry treats a grateful mother and her children.

The Luke Commission will follow these girls and make certain they are referred to anti-retroviral treatment clinics. We pray it is not too late. But as with each of us, their lives are in Christ’s hands.

If not even one sparrow is forgotten by God, how much more value are our dear Liswati friends. (Luke 12:6-7)

Thank you again for putting The Luke Commission back on the road. 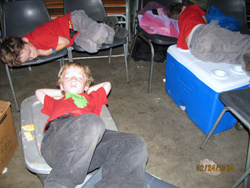 When it’s late and you’re tired, you sleep
wherever you are – normal life
for the VanderWal boys.